For about three quarters of a century our beloved LEGO bricks have been the sole product of the LEGO company. Only LEGO had the technology to make LEGO pieces at the high level of quality and in the mass-produced quantities that put them in reach of millions of fans all over the world. The technology to make LEGO bricks has, however, been getting cheaper with every decade, and that’s why there are now so many cloned products with quality levels approaching what LEGO itself produces.

Still, even those cheaper clone companies need a LOT of money to set up production and create the tooling needed to make their own bricks and pieces. That’s just the way that industrialized mass-production works. These companies put up the money, hire the people, and buy the machinery, and you get to buy their bricks at a few cents a piece.

But what if things didn’t have to work that way? What if you could make your own LEGO pieces on-demand and never had to buy any again? If that sounds like a good deal, then you’ll be happy to know that the technology to do what I’ve just described already exists. It’s called 3D-printing, and it’s either going to make LEGO bigger than ever or completely sink the company in the long run.

What The Heck is 3D Printing?

Chances are that you’ve probably heard about 3D printing before. It’s one of the hot new technologies and it’s already revolutionizing several industries, from automotive to medical.

LEGO makes its bricks with a method known as “injection molding”, where liquid plastic is injected into a form, which is then allowed to cool and becomes the final LEGO pieces after some finishing work to sort out any rough edges.

3D printers that make plastic objects like LEGO brick generally use either PLA or ABS plastic material. That second type, ABS, is the same type of plastic that authentic LEGO are made of. In principle, this means that a 3D printer should be able to create LEGO copies that will actually work.

In practice, you need a pretty good 3D printer to do this today. Desktop grade 3D printers can’t create objects with the precision and quality that the LEGO injection molding process provides. That’s not going to be true forever, though, and some of the more expensive printers can, in fact, create LEGO pieces that work well.

As with any technology, the professional-grade stuff will eventually find its way down to regular Joes and cheap, affordable printers. What effect will this have on the LEGO fandom and business model?

Before we go any further with this discussion, I should make it clear that even if you had a printer today that could make functional LEGO, there are still some serious limitations. For one thing, the finish from a 3D-printed brick is not glossy and attractive the way that real LEGO is. That’s because the injection molding process gives us a better finish and then LEGO further ensures that the brick is shiny and smooth. With 3D printers you always have that rippling surface, a side effect of the layers the 3D printer uses to build up the final product. You can make it better by finishing it manually with fine sandpaper, but that sort of goes against the point of saving labor with a 3D printer. 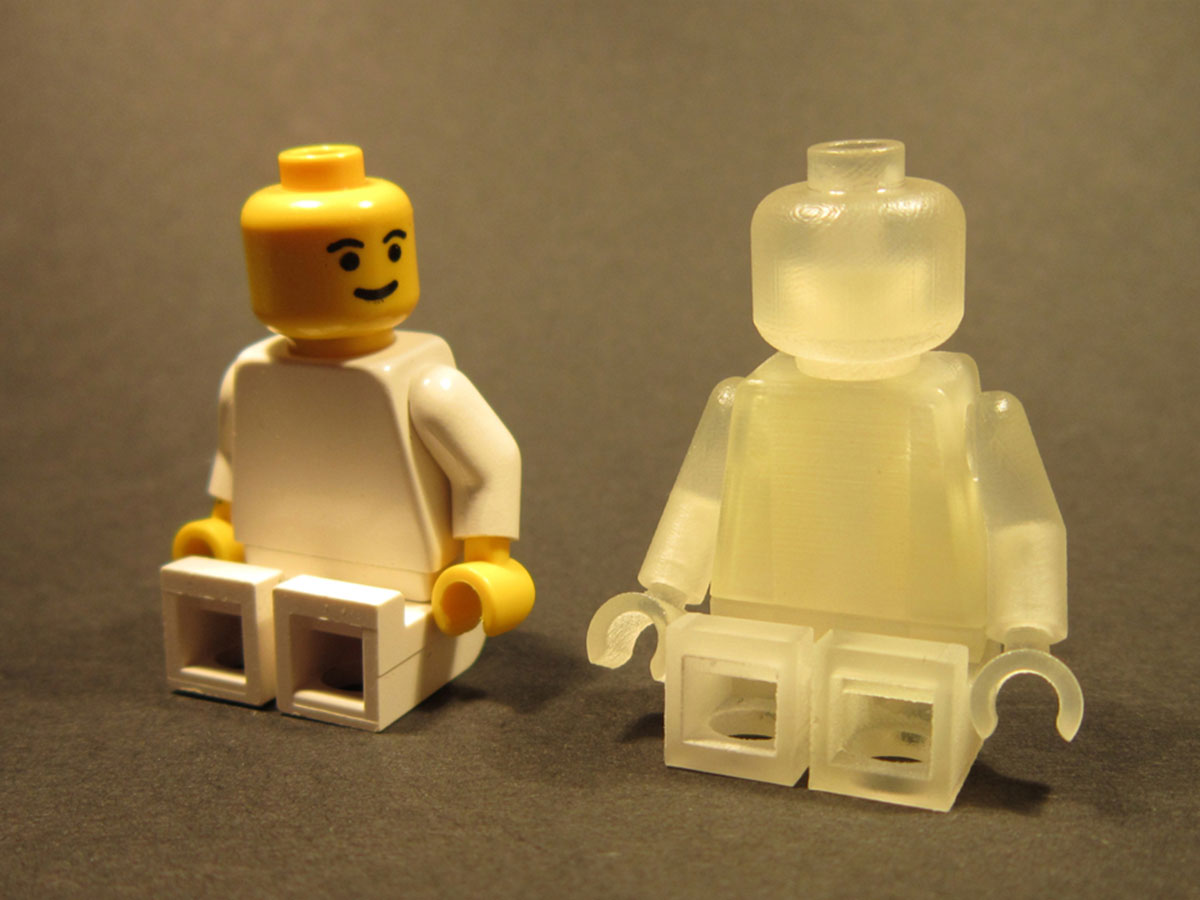 Printed bricks are also simply not going to be as durable. At least not yet. A lot of this is going to be solved by printers that can create much thinner layers, and improvements in the materials mix, but don’t expect anything to pop out of the machine that will equal what LEGO makes for now.

The last major limitation is speed and cost. Home 3D printers are still pricey at hundreds, or just more than $1000, being pretty typical for the bigger and better machines out there. They are also slow; although you can download a brick design and print a whole bunch all in one go, you’re still going to wait for your LEGO before checking that they are all up to scratch.

There can be more than a few major advantages of widespread 3D printing for LEGO itself, if they played their cards right. You see, LEGO has been diversifying, and these days they make their money not just by selling bricks, but bricks that express the stories and designs that LEGO has come up with.

If LEGO didn’t actually have to make the bricks, they could simply sell the plans for bricks, or the stories and settings they’ve developed within those product lines. I can even see a future in which LEGO sells its own 3D printing system designed specifically to make their product, with their special ABS blend and a stamp of approval. Imagine if LEGO made all of its old sets available for reprinting by people at home!

In other words, widespread quality 3D-printers could signal a shift in the LEGO business model, away from selling bricks and towards selling designs.

The dark side of 3D printing basically comes down to piracy. When you give people the means to easily make acceptable copies of information or a design, they’ll tend to want it for free. The media industry has been through this many times. The cassette recorder, CD burners, MP3s, and online music piracy have at their core the same sort of problem. The way that this has largely been solved is that these content creation companies now sell their products as a service rather than discrete units. So now we have Netflix, Apple Music, and other subscription-based services where you get access to the content legally and company keeps making money.

If 3D printing becomes a common and affordable thing, LEGO will have to reach their own solution to the problem quickly. If they think the multitude of companies making clone LEGO is a threat to their business, wait until every person has a little LEGO clone factory on their desktops.

Light In the Tunnel

We should never be afraid of technological development or assume that a technology is inherently good or bad. ABS 3D printing is clearly a technology that has some sort of implication for a company like LEGO, but it is not yet clear if that impact will be important or not.

One thing has been sure for a while now – LEGO has been moving out of the brick business for some time and diversifying into all sorts of other markets. Companies reinvent themselves all the time, and this is one technological development that may push LEGO in an entirely new direction. In fact, technologies such as virtual and augmented reality could turn LEGO into a purely digital toy, which has entirely different possibilities.

So, right now you may be asking if you, as a LEGO fan, should be looking into 3D printing today. I’ve asked that same question and so did a little digging to see how much success 3D printing fans have had in replicating LEGO-compatible pieces. The answer has actually surprised me. I have a 3D printer, but it’s already pretty old. Although it can print some nice models, I would never consider actually using a LEGO piece printed on it because, honestly, the models themselves are rather flimsy to handle.

People who have newer and better 3D printers than I do are able to print some pretty legit bricks with it, and even some bricks that LEGO has never produced. Specifically, I’ve seen some crazy curved bricks that allow completely new builds that aren’t possible with standard LEGO. Even if LEGO doesn’t end up taking a knock from 3D printing in general, it’s clear that you can enhance your builds in ways that no one could have imagined just a few years ago.