In 2011, a massive craze hit the gaming world. It was a game that mixed physical toys with a digital game into something that emptied the pockets of parents all over the world. The game was Skylanders, and the genre was something that has come to be known as “toys-to-life”.

Skylanders was not the first example of this game genre, but it was the first mainstream success. You bought the starter pack for your platform, which came with the game media, a few toys, and a peripheral that allows you to connect the two.

In Skylanders you use a portal device to “transport” the toy figure into the game where it “comes alive”. The only way to get that character is to have the toy, and often content would be unlocked this way. Information (such as experience points) could be saved back to the NFC chip in the base of the toy.

Skylanders has been a huge hit, and even Disney tried to get in on the action for a while with Disney Infinity. So where is the world’s fifth-largest toymaker in all of this? It took them a while, but LEGO has come to the party with its 2015 release LEGO Dimensions. 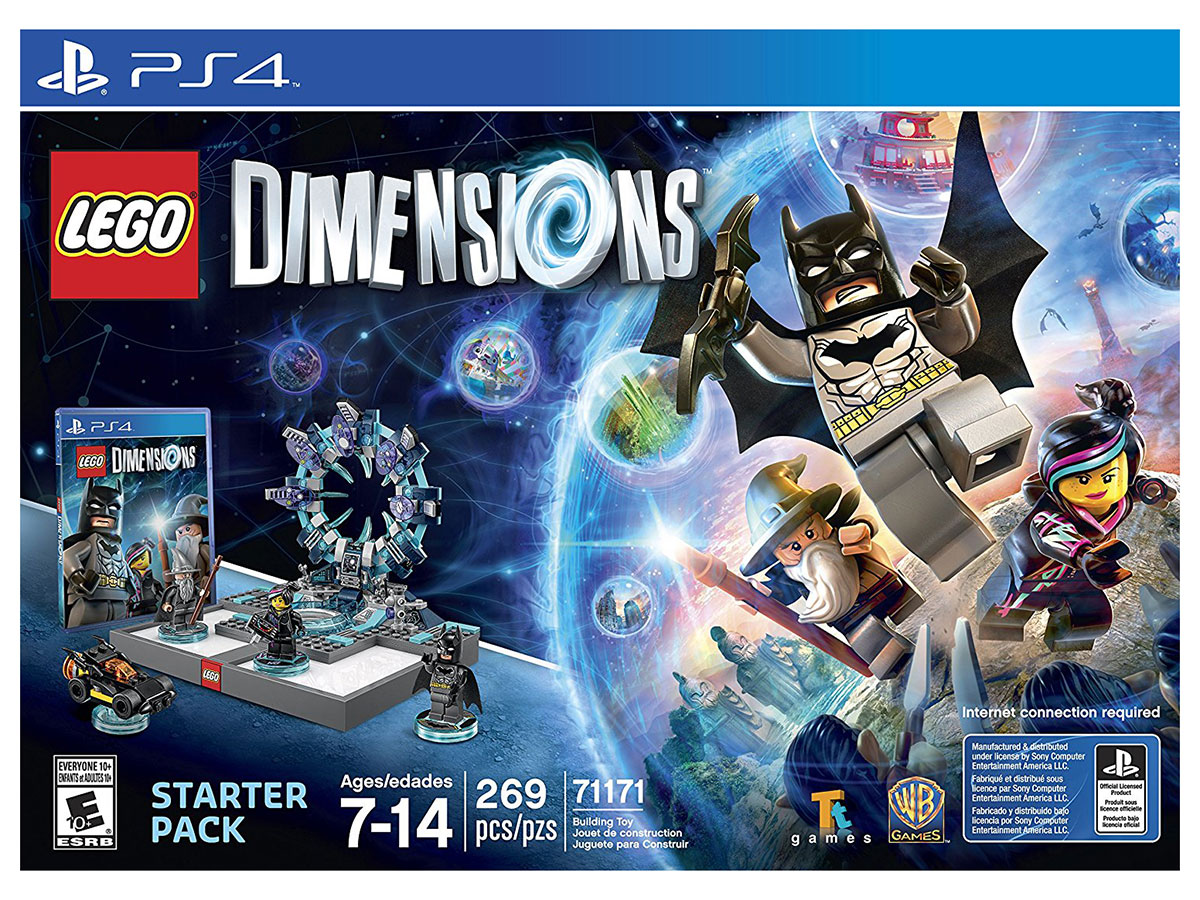 Just as with Skylanders, you have a portal device that gets connected to your console; with this device you can activate the extensive range of LEGO toys that you can buy to augment the game. These toys then get put into the game and have various effects or unlock content. So how do you get started? By buying the starter pack of course!

The Starter Pack that you can find on Amazon includes everything you need to enjoy the core experience of LEGO Dimensions. In it you’ll get the game media (which varies by platform) and a number of toys to get you started.

The second crucial piece is the portal, which is the hardware used to scan the toy and verify to the game that you’ve placed it in the portal. Cleverly, you actually have to build the LEGO gateway on the pad, and enough LEGO bricks are included to do just that.

You’re also started off with three minifigs. All three of these characters played in the LEGO movie. The first is LEGO Batman, who also got his own successful movie. There’s Gandalf, from the Lord of the Rings, and finally there’s Wyldstyle, who is an original LEGO character. There’s also a LEGO Batmobile, which is freaking awesome if you like Batman, and who doesn’t?

It’s so uniquely LEGO that you actually have to build everything before using it in the game. It’s just a little gimmick, but it’s very cool.

This is a game with a story, and a rather unique one at that. It details a threat to the entire LEGO multiverse, spanning the breadth of the different licenses and, of course, LEGO original properties as well. Which means you’ll be meeting an insanely wide range of LEGO characters and locations.

The big baddie in this epic adventure is known as “Lord Vortex”, who wants to rule the entire LEGO multiverse by finding and controlling the foundational blocks of LEGO that underpin the multiverse. Vortex is recruiting LEGO characters from all over to help him in his evil quest, but at the same time the player can help Batman, Gandalf, and Wyldstyle recruit their own army of heroes to stop Vortex’s plans.

OK, maybe it’s not THAT unique. But although the core premise may be unoriginal, it opens up an incredible mashup of everything LEGO for a potentially incredible play experience.

At the time I wrote this, there were 21 distinct LEGO licenses and properties included in the game content. This includes DC Comics, Back to the Future, the Simpsons, Harry Potter, and much, much more.

There’s a lot of content on offer here and, best of all, you can always use the actual toys with your main LEGO collection. That is a big advantage over something like Skylanders, where the figures just sort of sit there.

Apart from the starter pack, there are five kinds of content packs you can buy to expand the game.

Story packs add additional levels to the game, expanding where you can play and what you can do. Apart from franchise-specific levels, you also get new characters and vehicles. The unique aspect of a story pack is that you also get a retelling of the franchise story in question, but with that LEGO crossover twist built in.

The next kind of pack is the level pack. There is no substantial story content, but you get one character and then two items which can be either a vehicle or gadget. Obviously you also get a level – just one.

The team pack gives you two characters. Each character also gets either a vehicle or tool. You also get “fun packs”, which are, basically, half a team pack.

The last type of content pack is not for sale, but is usually part of an event. It’s a single polybagged character, and so far there have been only two.

Fun on a Bun

LEGO Dimensions has been a huge success for LEGO so far, and with good reason. It’s the biggest mash-up toys-to-life party that has something for everyone. Unlike Disney Infinity, Dimension is not just limited to properties that LEGO owns. There is simply no other game that has such broad appeal and scope for play.

If you are a LEGO fan,especially if you have multiple generations of LEGO fans in the same home, you owe it to yourself to get a copy of this game.