Mega Bloks may be a swearword in the minds of many hardcore LEGO fans, but since the early 2000s the plucky Canadian company has addressed many of the criticisms leveled at them over the years. Quality control and available licenses are now catching up to the beloved LEGO brand.

Here I wanted to highlight the five sets I think best show off how far Mega Bloks has come over the years and how far it may yet go. 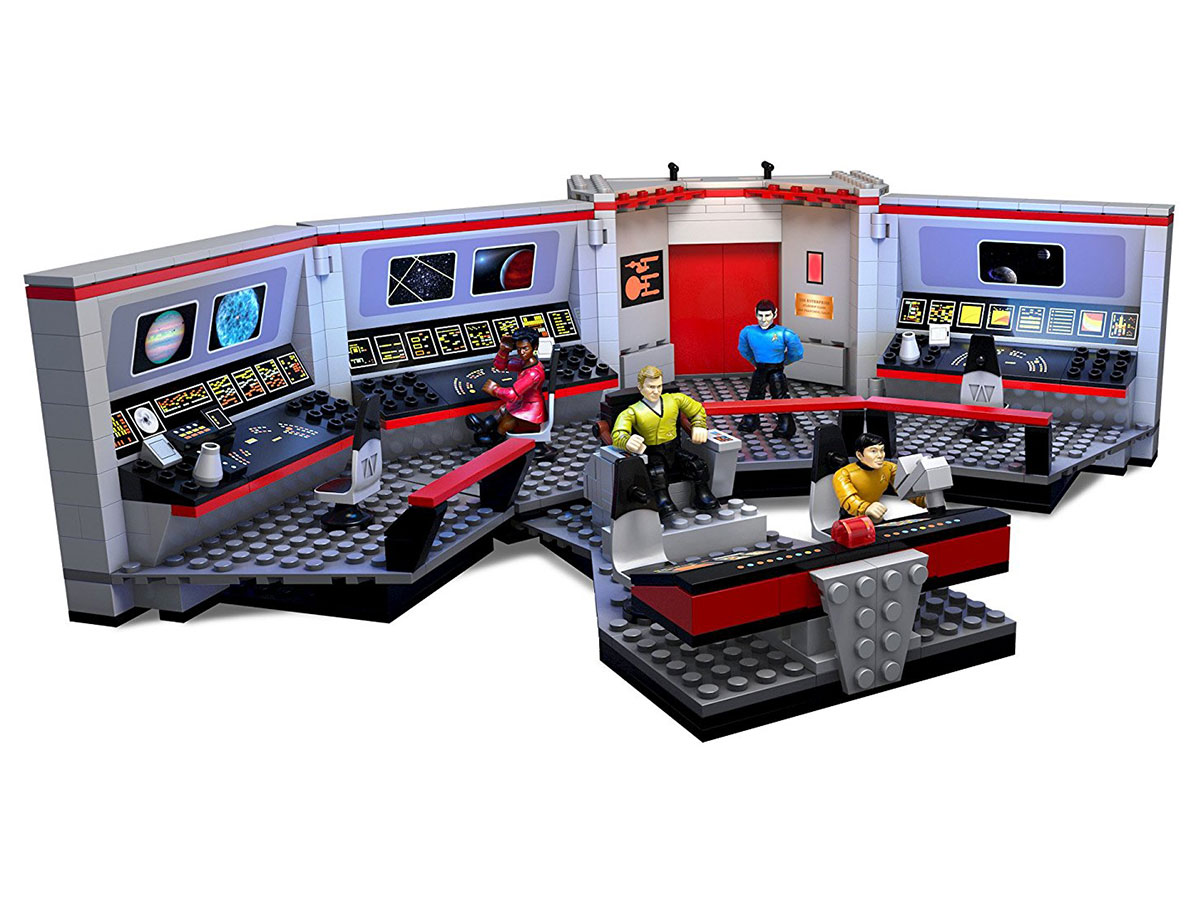 I’m a big Star Trek fan, although I’m a bit too young for the classic series to have been “my” Star Trek. Still, I absolutely adore this Enterprise bridge set, and since there is no Next Generation version yet, it has to go on my list.

The figures are awesome and capture the personalities of the characters well. Just look at Kirk hunched over in his chair or Spock standing at attention in the back. The figures are very poseable, the little tricorders and phasers are just so cool, and overall it’s gorgeous from every angle. Best of all, there are other sets, such as the transporter room, that can be combined with this to build out your own little sets. Any fan of Star Trek would be thrilled to have this on display.

Pirates of the Caribbean 3: The Flying Dutchman 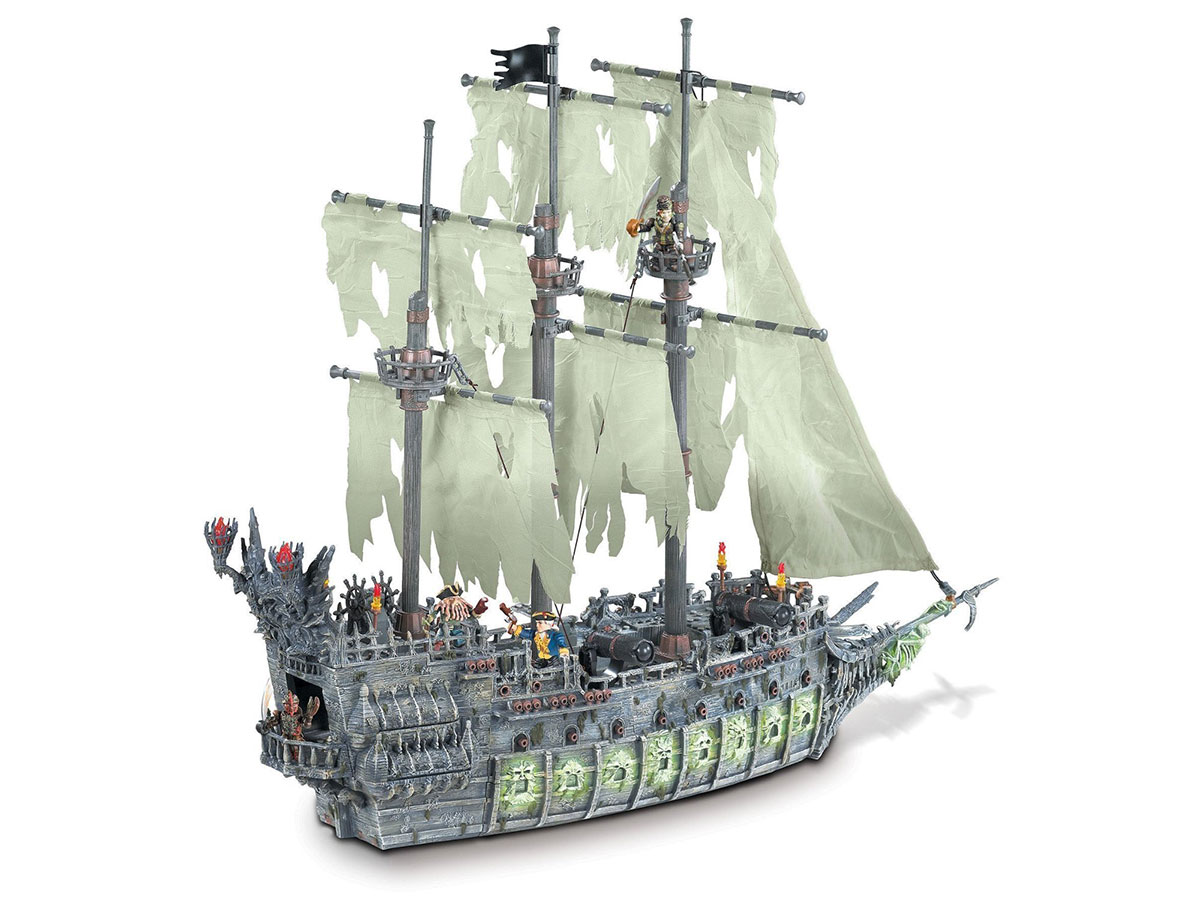 I was very surprised when I saw a product from Mega Bloks with a Disney license, but somehow both LEGO and Mega Bloks have products from the Pirates franchise on the shelves.

The price of nearly $800 would make even the most hardcore builder choke on their minifigs, but this is just such an incredible set. As usual, the figures included are fantastic and much more realistic than LEGO minifigs. This set has only 235 pieces, but it’s a large and detailed ship that glows in the dark.

You won’t be re-purposing any of these large specialty bricks for free-building, but that’s not the point of a set like this. I’m just impressed by the sheer scale and detail of it. I wouldn’t buy it myself, but it has to be in the top five for the sheer audacity of it. 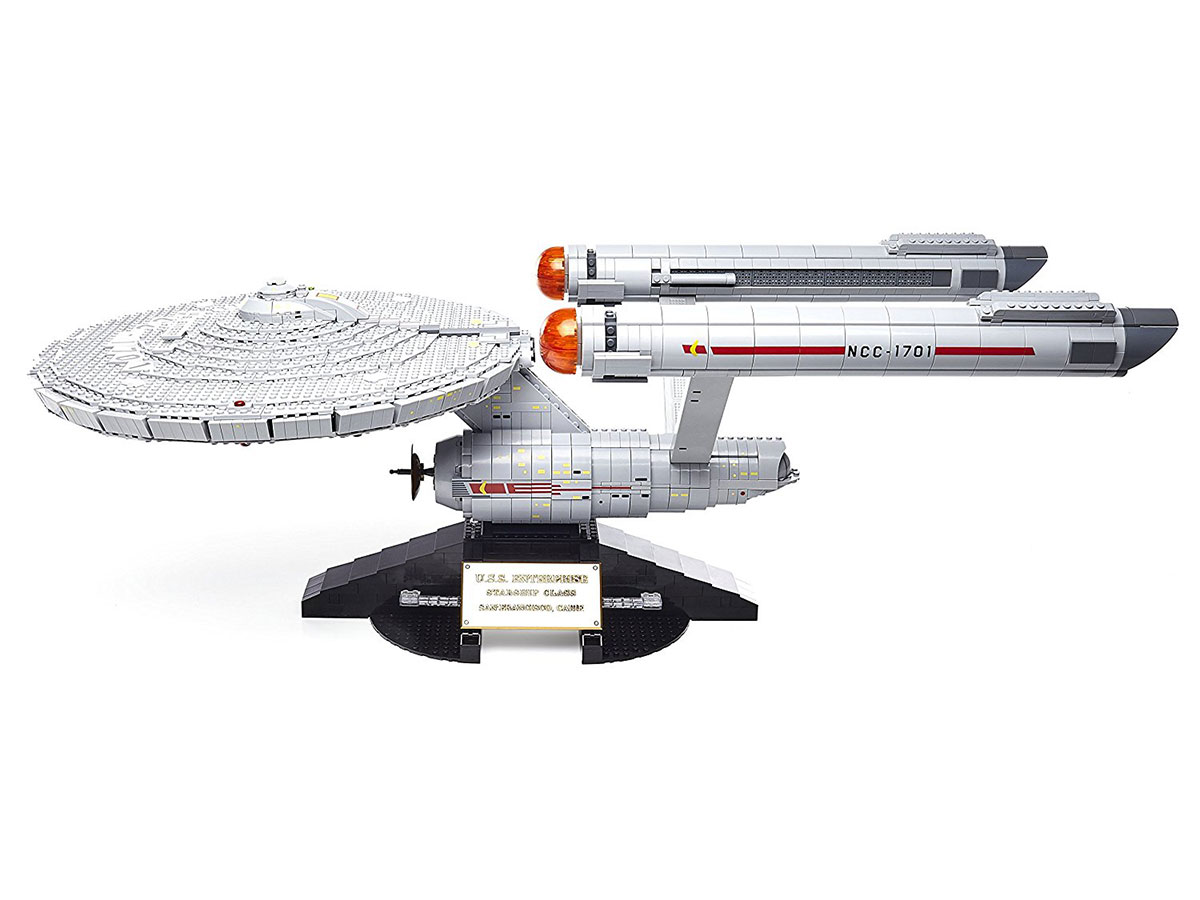 Another Star Trek set on the list? You better believe it – I said I was a fan. In all seriousness though, LEGO has never held the Star Trek license and the best a Trek fan can do is to head over to custom fan creation sites and meticulously buy the individual bricks for these fan-made designs. Actually, that sounds like a lot of fun, but for most people, having an official set would be the way to go.

I absolutely love this set from Mega Bloks. It’s beautifully detailed; Mega Blok’s (dubious) reputation for large unique pieces pays off here when you look at the red caps at the front of the warp nacelles or the deflector shield array. It’s a set on the more expensive side of things but not unreasonable, given the size and detail. Unlike something like the LEGO Millennium Falcon, this does not open up to show crew inside, but they’ve still found a neat way include figures with the set. Spock and Kirk (in dress uniform) have their own display stands on the pedestal for the model.

Overall it’s a fantastic set and I think it deserves to be in the top five regardless of whether you like Star Trek or not. 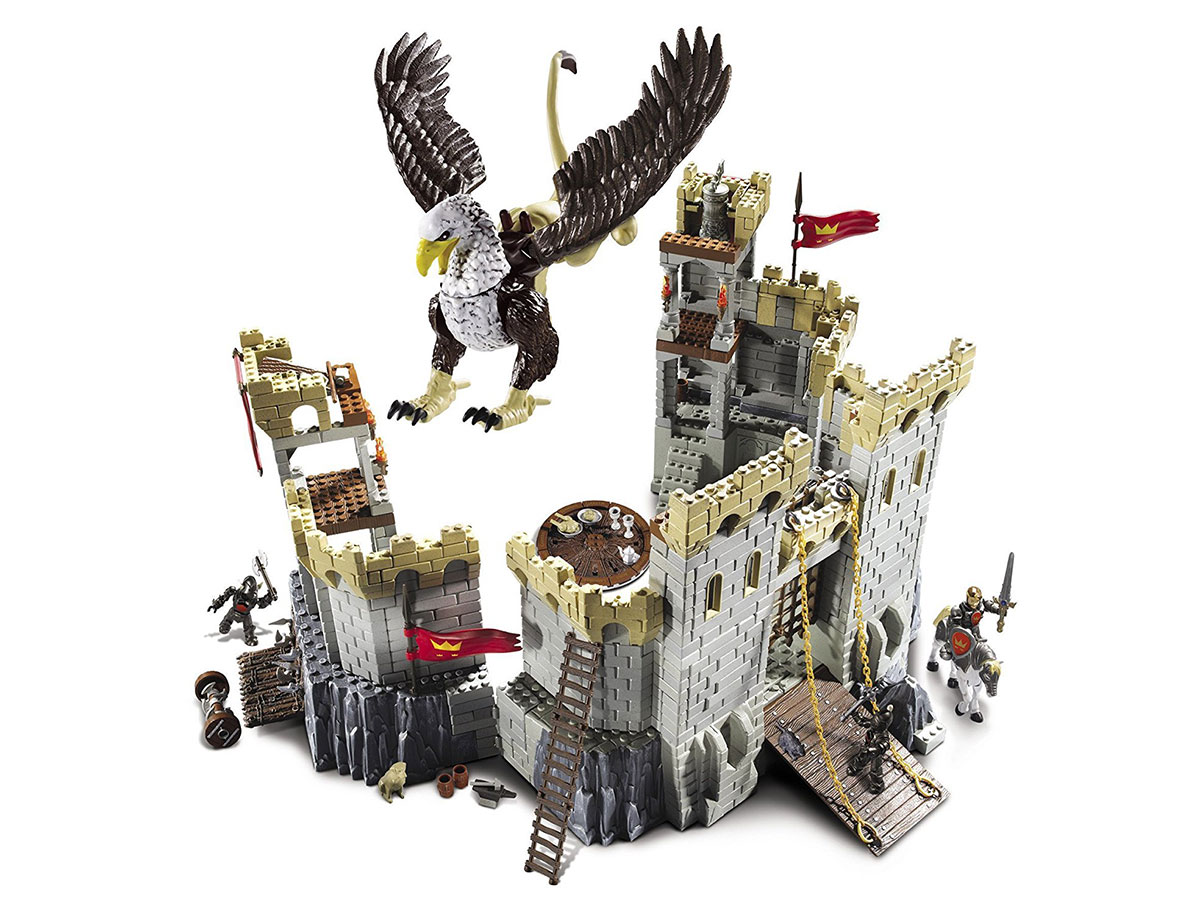 Not every great set has to be from a big licensed property to be good. For example, I love a lot of the sets from the LEGO City series, even though it’s not from a big movie or anything. Similarly, this King Arthur set draws from a public domain story from Britain, but turns out to be an awesome kit on its own merits.

The set presents you with the front facade of a medieval castle with lots of interesting details and working parts. The main, er, draw is the drawbridge. It can be lowered by pulling Excalibur from the stone. There are lots of little actions, such as anti-siege machines and the folding design of the castle to switch between display and play modes. There are six very nice figures included and I love the paint and color selection too. Because this is not from a known property, it’s doubtful anyone would want to use it as a display piece, but as a playset for kids (or adult kids) it’s one of the best that I’ve seen from Mega Bloks. 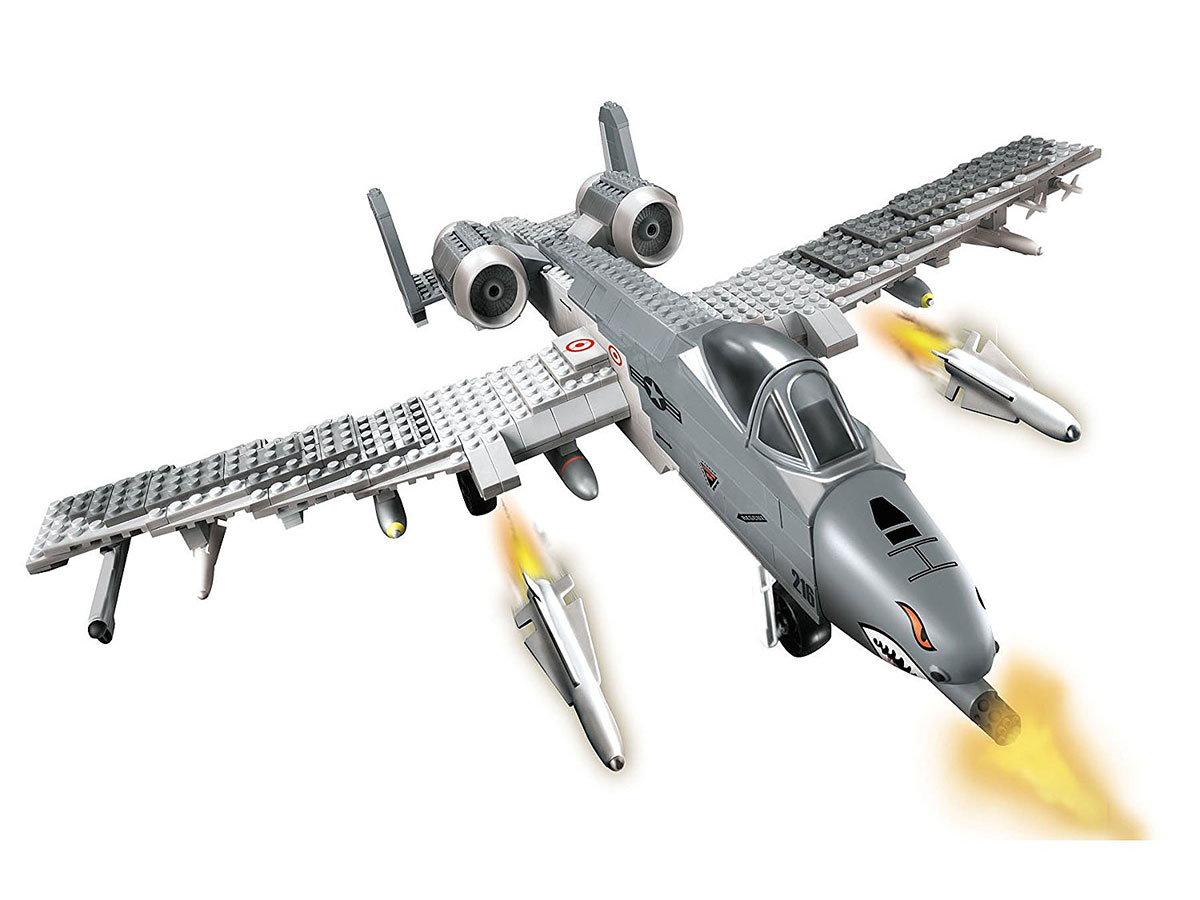 I’m a fan of aircraft and military vehicle models in general, but the A-10 Warthog is one of the most badass planes ever made.

While not a perfect replica (obviously), this great model set really captures the spirit of the tough battle plane. If you care about this sort of thing at all, it’s one to pay attention to.

This is an entry into the “Probuilder” series that is much more detailed and generally uses more individual parts, which are made smaller to achieve this. The Warthog set consists of an impressive 545 pieces, which means you are in for hours of fun while building it.

I actually like quite a lot of the Probuilder sets, but if you have to pick only one then this is the most interesting, in my opinion – although the P-51 Mustang runs a close second. 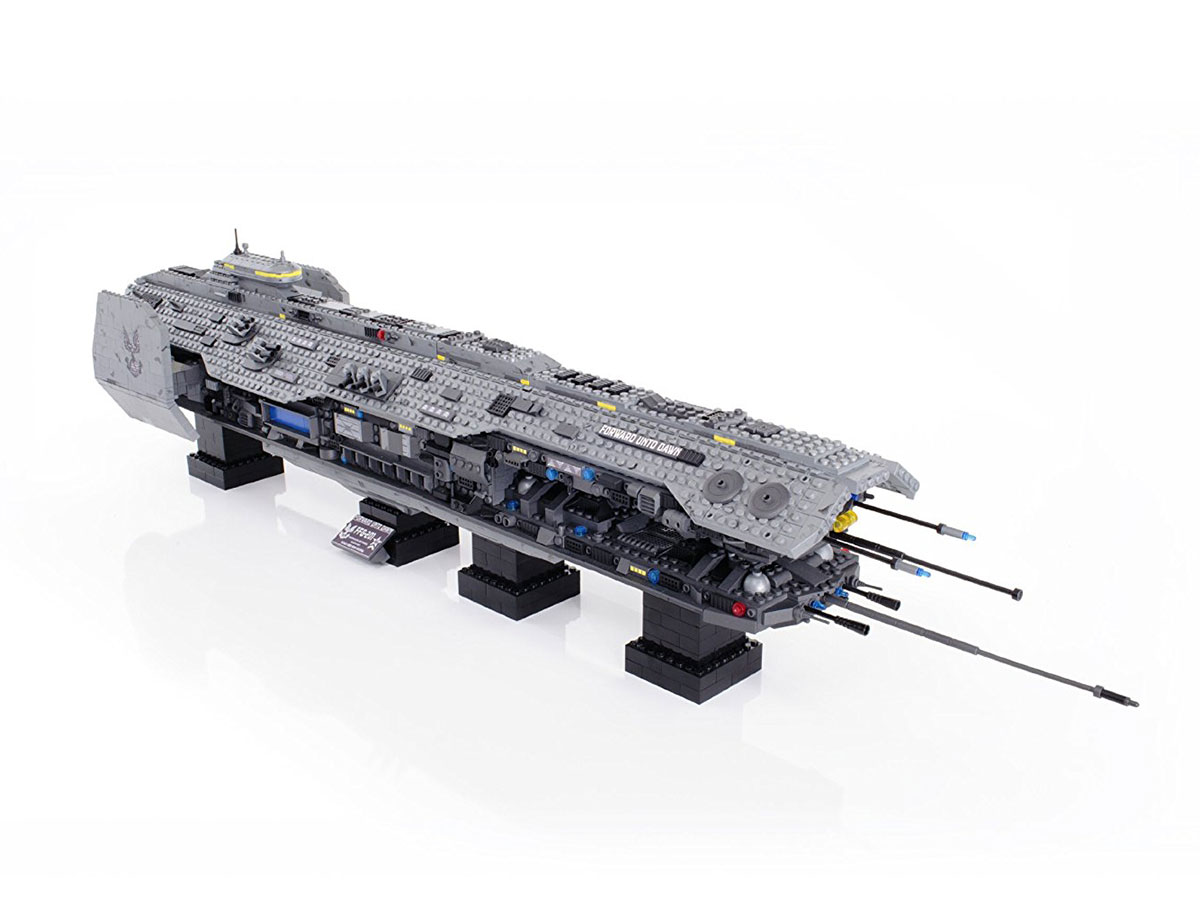 I’ve saved the best for last. Halo is one of the biggest video game franchises in the world, and getting the license to this and Call of Duty were pivotal in the rise of Mega Bloks into something actually worth considering in this day and age. So it’s fitting that the most impressive Mega Bloks set is one of their Halo offerings. This 2,877 piece monster will set you back a few hundred dollars, but there aren’t many brick models of any brand as impressive as this.

It’s a Charon-class frigate from the world of Halo that looks the part from the outside, but when you open it up the interior is obviously not to scale. Instead you get a representation of the different main sections of the ship, including the stasis pod for Master Chief, one of the figures included in the set. You also get an awesome light-up Cortana, two crew, and two enemies. The Halo sets from Mega Bloks have been consistently well-reviewed and fans have had little to complain about. This set stands at the top of the entire range and it’s one that true fans of Halo should not pass up, if they can afford it.

If you’re a hard-core LEGO fan who has avoided even looking at Mega Bloks for years, these new sets may come as quite a shock. The company has improved by leaps and bounds since the early days, and any brick fan would be proud to have one of these models displayed in their home. Mega Bloks may not be there quite yet, but if I were LEGO I’d be looking over my shoulder a lot.