The LEGO Mindstorms series of products are the pinnacle of LEGO’s toy line when it comes to complexity and price. This is why you have to be extra careful before laying out any cash. After all, Mindstorms cost a LOT of money.

I’ve put together this short guide so that you have all the most important information in one place before you make a buying decision. This isn’t an exhaustive guide to Mindstorms, just a summary of the series that will make you knowledgeable enough that you won’t go into a shop blind.

There are three main generations of Mindstorms. Although LEGO has had several smaller product lines that are both programmable and robotic, the ones that you should care about all fall into these three generations.

Released in 1998, the RCX Mindstorms (then called the “Robotics Invention System”) represents the first proper entry in the series. The programmable brick (which is the computer at the heart of Mindstorms) is properly primitive by modern standards. You have to remember that this little computer was made long before smartphones were a thing. The 8-bit microcontroller wouldn’t even power a toothbrush these days. OK, maybe that’s an exaggeration, but there’s no argument that this product is thoroughly outdated.

That is why I can’t really recommend that anyone should go out and buy first-generation Mindstorms. It can be tempting, because people are selling them off for good prices. But unless you’re a collector or just curious about historical LEGO, there isn’t much here to justify the effort.

The main issue is that the RCX just isn’t compatible with most computer systems anymore. Given the time of its release, the operating system the RCX was designed for is Windows 98. With patching and some fiddling under the hood, it’s possible to get it working, but Windows XP itself is now completely removed from Microsoft support and shouldn’t be run by anyone.

This means that the only working solution these days is to run the heavily-patched instance of Windows XP on a virtual machine and then port your USB connector through to it using the virtual machine software. So be warned that you’ll have to go through all of that trouble just for the privilege of experiencing LEGO’s first big swing at toy robotics. 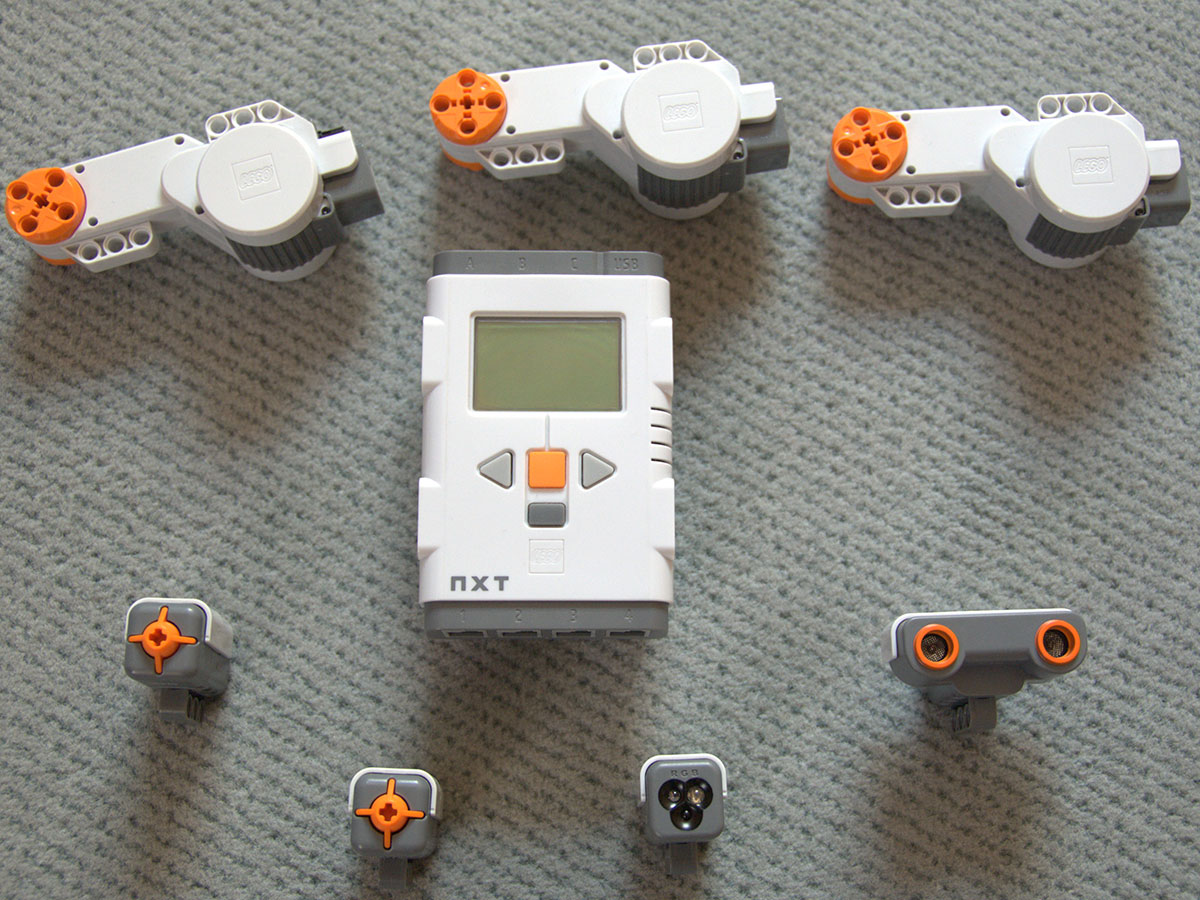 Unlike RCX, there is still an argument to be made for buying an NXT set, especially if you can get it for a good price. But we’ll go over the pros and cons of this choice below.

The NXT jumps straight to a 32-bit processor from the dinky 8-bit unit found in the RCX. It can have four sensors and three motors connected to it. There’s also a speaker and Bluetooth support.

NXT is provided in two editions: Retail Version Set & Education Base Set. One key difference between the two is that the education set uses a rechargeable li-ion battery and the retail version uses six AA batteries. If you were buying the set new I’d say the rechargeable versions was a good deal, but lithium batteries degrade and there’s no guarantee that a used Education Base Set will still have a healthy battery. So if you’re buying used, just go with retail and use your own rechargeable AAs.

NXT is still compatible with modern operating systems and drivers are available from XP all the way to Windows 10.

LEGO has also seen fit to make the firmware of the NXT intelligent brick open source; if you really want to do custom, advanced things with Mindstorms, NXT can actually be a better choice than the latest models. It’s really becoming a LEGO hacker’s favorite toy.

You should be aware that there was a mid-generation update to NXT, appropriately called “NXT 2.0”, that added a color sensor and a sound editor. The sound sensor from NXT 1.0 is gone, however – traded off for a second touch sensor.

It should be noted that the intelligent brick has not been upgraded at all and is the same one included in NXT 1.0. You can mix the parts between the sets without issue. Any NXT sets you find new at retail today are going to be 2.0 sets, unless you live in Alaska or something.

While NXT may not be the latest hardware, many of the LEGO-designed NXT robots have become classics in their own right and are worth collecting.

As I write this, the EV3 system is the latest in the range, but it’s already a few years old. Released near the end of 2013, the upgrades to the intelligent brick are still pretty dramatic, even though there’s a smaller generational gap.

While the NXT had a slow 48Mhz CPU, the EV3 is just over six times faster in terms of core speed alone. It has one hundred times the RAM, going from 16KB to 64MB. The built-in storage has gone from 256KB to 16MB, which doesn’t sound like much, but there’s also a microSD slot now!

The Bluetooth has been improved. You can get WiFi with an optional dongle and there’s now a USB host-port option, which means the brick can use USB devices. LEGO has also taken modern mobile devices into account, and Apple devices can now be connected. As you might expect, there’s an EV3 App that let’s you do things like program the robot.

Using this massive leap in power and connectivity, people have built some incredible machines that we often see featured in viral videos. Apart from that, the actual robots you can build out of the box are far more entertaining, more modern-looking, and significantly more capable than the NXT ones.

Just remember that there is also a retail and education set here and the education set has parts not included in the retail version! So make sure to check the parts list.

So let’s summarize the reasons for buying any of these three generations.

Generation One should be an automatic “no” for anyone who just wants to get into Mindstorms. It doesn’t matter how cheaply you can pick up a used set, the limited abilities and technical issues on modern computers mean this is only for the most hardcore fan who has the other Mindstorms products and wants to collect, experiment, or learn.

NXT Mindstorms are a great used purchase and you can get them for much less than the price of a new EV3 set. Since it’s been open-sourced, there’s also a lot of hacking and mods produced by other people – you can use these without being too technical yourself.

Another big factor is that the NXT generation is simply easier to use and learn than EV3. The new system does a lot more, but that means there’s more to learn. I’ve seen advice that NXT is better for a beginner and, especially, younger children. Once you have the hang of NXT, then moving on to EV3 is less of a learning curve.

For most people, however, I’d recommend just buying the EV3 base set if you can afford it. The abilities of EV3 are such that it’s worth the extra bit of learning and, of course, LEGO is giving the most support and development to EV3 right now. Given how long the gaps were with previous generations, it should still be a few years from now (2017) before EV3 is replaced. So, if you have the cash there’s little risk of buyer’s remorse!