It’s the LEGO collector’s worst nightmare. You buy a set of LEGO or order some bulk bricks online, only to find that what you thought was your favorite Danish plastic brick is something made by a foreign company you’ve never heard of. How is someone supposed to avoid buying a counterfeit LEGO product or accidentally buying clone pieces? In this article I’m going to go over some of the ways you can tell whether the LEGO that you’re looking at is the real deal.

Let’s start off by talking about LEGO set packaging. The good clone brands such as Mega Bloks or Oxford aren’t worth mentioning here, because these companies don’t even try to look like LEGO when it comes to their packaging. Instead, they are building their own brand image on purpose. The problem comes from virtually anonymous manufacturers, usually from the Far East, who churn out knock-off sets with the express purpose of fooling parents and online buyers into thinking they are buying real LEGO.

That takes two forms. First there is an actual attempt at an exact copy that bears the right trademarks, and then there are ones who are just not quite right. For example, I’ve seen a set that looks like the box of a real LEGO Star Wars product, but it says “Star Wnars” with the company name as “Lepin”. Obviously, neither of those names are going to fool anyone, but they are written in such a way that the font makes them look like the real thing.

Watch this hilarious video by Lord Karnage where he shows off his fake LEGO purchase:

Other signs that you can look out for are spelling errors in the copy and, of course, low-quality images or printing. Often the English on the box will be pretty broken as well, so native English speakers will know something is up right away. The internet is also your friend. Google the set in question – if the set is not made by LEGO you won’t find it; if it is by LEGO a box shot of the real thing can help you spot differences quickly and easily.

When it comes to the actual bricks, things are not quite as straightforward as they are with the set packaging. The technology to injection mold plastic bricks is getting cheaper and cheaper. On top of this, it’s no longer illegal to make plastic bricks that are LEGO compatible and are, for all intents and purposes, identical to the LEGO bricks.

One thing that’s NOT legal is for the bricks to have the LEGO name on them. LEGO goes to a lot of trouble to ensure that they clearly mark all of their bricks. Every single stud on every single brick has a tiny LEGO logo on it. Go see for yourself. A fake brick that has no logo at all is easy to spot. However, some fakers pull the same tricks as the box artists do. You could be looking at a stud that says “Lepin” or something similar.

If you need to, use a magnifying glass or ask for a closeup photo. Compare the logo to the style and placement on a genuine brick that you may have. 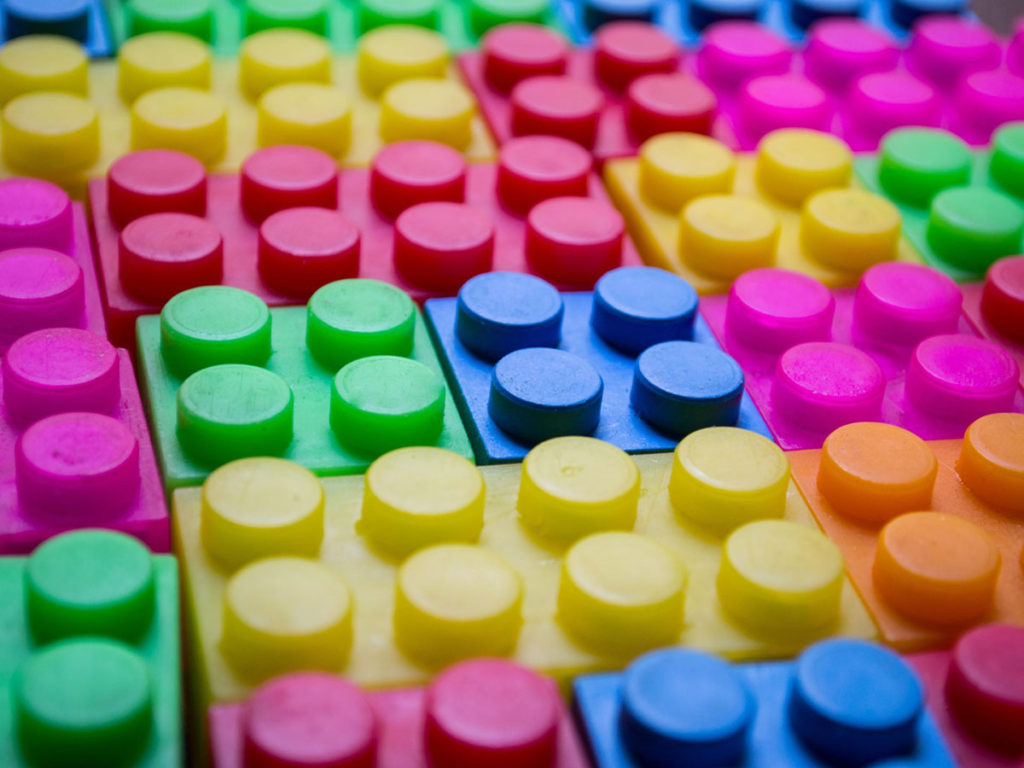 The next thing you can look at is color. Since you can basically look up any brick online, you can also check whether the color you see matches the range of colors that LEGO has produced. While you may get the shape and size of the brick exactly right, getting the plastic mix just so isn’t that easy. Often, fake bricks may not quite match the shade and tone of the real one. This is especially important when you’re buying bulk for a project where any color differences are going to show up when real bricks are placed next to fake ones.

If you have the brick, or a sample of the bricks you want, you can also test them by weighing them against a sample of genuine LEGO. The LEGO manufacturing process is very precise and there shouldn’t be any deviation in the weight of the bricks. A lighter brick may mean a lower-quality plastic.

Fake bricks also sometimes have a different cut to them. LEGO bricks are precise and have fairly sharp corners and edges. Fake bricks may have inconsistent edges or ones that are too sharp or too round. Comparing them to the real thing will usually show up the fakes quickly.

Minifigures are a lot harder to fake convincingly, compared to the bricks. There are many more parts to copy. Minifigs have a very distinct look and you can usually see when something is off. It helps if you can look up a picture of what the figure is meant to look like, but if you can’t there are some spot checks that you can do.

Just as with the bricks, LEGO has put their little logo just about everywhere it would fit. You’ll find it in the top stud of the minifig head, on the neck stud, the hip studs, and inside the feet. Honestly, I feel like paper currency has less effort put into it to prevent counterfeits.

It helps if you’ve handled a lot of real LEGO minifigs. There is a certain quality to how tightly the arms fit and how well they move. If you’ve felt it before, it’s easy to pick up if something is off. For some reason, fakes also often have feet that are the wrong shape or hands that don’t look right. The big giveaway is usually the quality of the print. Real minifigs, especially recent ones, have very good quality printing. It’s detailed, the colors are consistent, and the proportioning is done correctly. Fake minifigs might have fuzzy artwork, faces that seem too big, or other visual anomalies.

Apart from actually inspecting the pieces in photos or in person, there are other ways to tell – not foolproof, mind you, but clues that can tip you off that something isn’t right.

Price is an important factor. If the price seems too good to be true, it usually is. Scammers have learned their lesson in this regard and tend to charge believable prices now, but there are still a few bozos who may not have caught on yet. If the set you are looking to buy is quite rate, a big Millennium Falcon for example, you should still be suspicious if the seller isn’t too keen to push the price. If they have multiple sets of the same to sell for a rarer model, or if they claim all their sets are new, you should be wary.

You should be careful, when it comes to older LEGO, that you don’t accidentally think something is fake when it is not. Some of the anti-counterfeiting measures on LEGO weren’t there yet on older products. For example, older minifigs may not have the logo on the top stud of the head. If it’s an old piece, it may be worth asking for advice on a forum, especially if you have to part with a lot of money for it. No one wants to blow $200 on a fake Mr. Gold, after all.

It’s a Tough World Out There

It’s a shame that we have to live in a world where someone is always trying to cheat us out of our hard-earned money. If it isn’t a Nigerian prince sending you an email with a promise of money, it’s some guy selling fake watches down an alley. That sad reality extends to our beloved LEGO, but with a little homework, and a mild curbing of enthusiasm, we can avoid the disappointment of buying a hundred dollars of worthless plastic junk like I did. OK, it was a giant fake transformer, but it still hurt, you know.