LEGO Architecture sets have a charming simplicity to them. They aren’t 1-to-1 replicas of the buildings they model, but cleverly boil down those designs to their essence. This reduced number of bricks and avoidance of the idea of perfect replication make the sets affordable, fun to build, and very pretty in their own way.

But what if you want to take on the challenge to recreate a famous building in all its glory? This may be the time to think about the LEGO Creator Expert products. They’re also known as “modular buildings”, but these days they are sold under the “creator expert” sub-brand. These sets have been created specifically with AFOLs in mind and, in fact, adult fans were asked for input in the creation of these advanced sets. Today Creator Expert sets have quite a variety. There are some beautifully-rendered licensed vehicles and, of course, the buildings that I’ll be talking about here.

LEGO Creator Expert sets are amazing and there aren’t that many of them out yet. I’m not sure exactly how popular this sub-brand of will be, but any self-respecting LEGO fan should plan to own at least one in case they decide not to continue with the line of products.

How Are Creator Expert Sets Different?

LEGO Creator Expert sets don’t just have a lot of pieces (they do!) – the building methods you need to completely construct them are drawn from and developed with techniques that the master builder fans themselves developed. Thanks to this approach, these sets have details and structural features you simply won’t see in any other type of official set. These sets have also been designed to be strong and transportable, and will often break into smaller modular pieces just for that very purpose.

If you are also a collector of LEGO pieces, these sets often come with some unique or rare pieces. So, for some people this is a major incentive when it comes to their own custom builds. Most of the buildings in the Creator Expert range are not based on real-world designs, as with LEGO Architecture, but there are three that I want to highlight here.

Finally, as you might expect from such big sets, the Creator Expert sets are a little up there in price. They aren’t meant to be pretty desk ornaments – these are centerpieces you can display with all the fanfare of a LEGO Death Star.

Here are three of my favorite buildings. 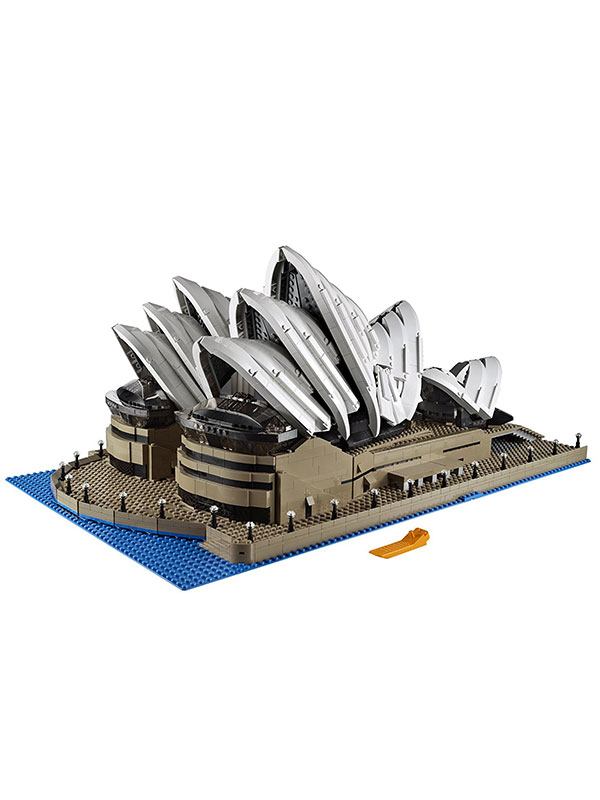 The Sydney Opera house is widely regarded as one of the greatest architectural works in modern times. It’s won numerous prizes and is instantly recognizable. I waxed lyrical about this particular building in my article on the best LEGO Architecture sets, and so I’m not going to repeat all of that here.

Compared to some of the other Creator Expert sets, this one has an almost reasonable number of pieces. It’s just short of 3000, at 2989. This includes lots of tan LEGO bricks, which are actually pretty hard to get. This is also a set that manages to do justice to the curves of the opera house roof, something that’s a little lacking in the more simplified model.

Since the real opera house is adjacent to the coastal waters, LEGO has chosen to emulate that by setting it all on a 48×48 base plate in blue. This is the first time ever that such a base plate has been made, which also increases how desirable this set is as a whole. In terms of the detailing in this model, it’s just incredible. No LEGO set is ever going to look like a photoreal model, but given that you have to work with studs and the scale of the thing, it’s got all the right bits in the right place.

One thing that I think is attractive about this set is how it’s apparently easier to build than it looks. According to reviews by people who bought and built one, it take about 10 hours, with experts getting it done in about six. That makes this Sydney Opera House a great way to dip your toes.

On the other hand, it costs about five hundred bucks, which is not a small amount of money. So if you are looking for a challenge and don’t just want the model for its own sake, it might be better to look elsewhere. If, however, you love this building, then this is the best-looking official set you’re going to get. 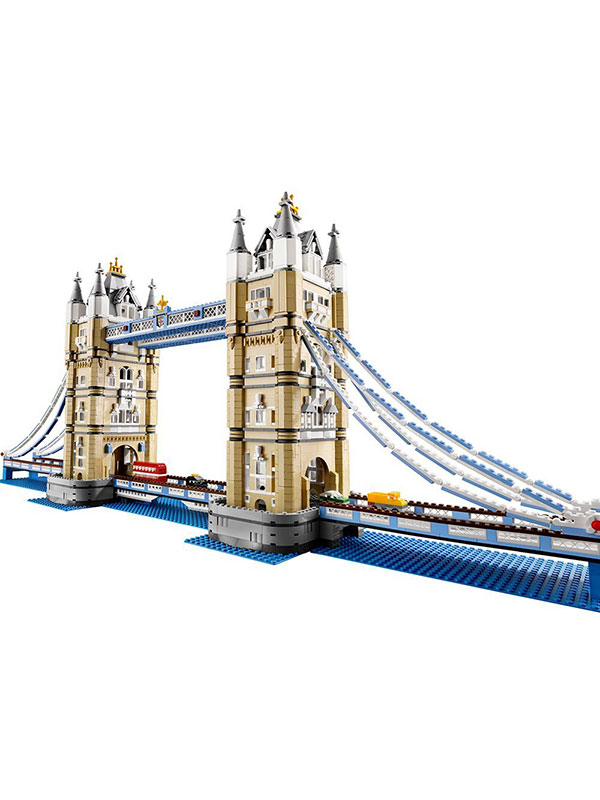 Tower Bridge has a pretty descriptive name. It’s a bridge with two towers on it. It’s a drawbridge that can lift its parts to let ships through. The bridge was built between the years 1886 and 1894. It spans the famous river Thames, which runs through the city of London. Tower Bridge itself has become an iconic part of London’s identity and is therefore plastered on everything from postcards to bedsheets. I know that last one because I bought one for my own bed. True story.

This set from LEGO has 4295 pieces and gives you both towers, the drawbridge span between them, and then the bit of road on either side that the suspension cables attach to. Not only that, but they’ve included the most clever little vehicles. At this scale of course, they don’t have much detail, but since the tower is viewed at a medium distance, they actually look fantastic. You get the instantly-recognizable red double-decker bus, a black London taxi, a truck, and a green car of no particular description.

As with other buildings in this series, the whole thing is designed to be modular so that you can break it up into large pieces and then move it if you have to. The design also uses building methods to make everything strong enough to manipulate and handle.

The question that everyone has with this set in particular, however, is whether the drawbridge actually works. The answer to that is, luckily, “Yes”, and you can have the bridge up or down for your display. 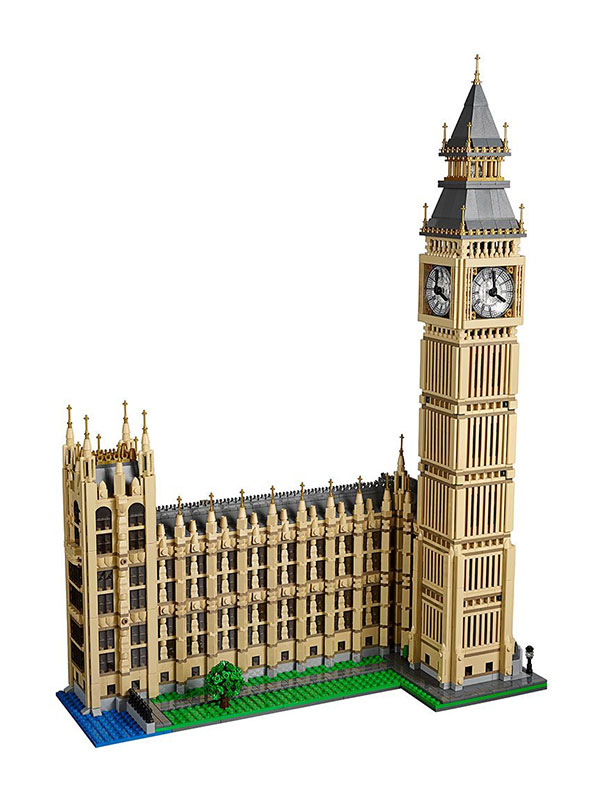 As recognizable as Tower Bridge is to those that know anything about London, for many people Big Ben IS London.

This is yet another building that also received the LEGO Architecture treatment and I did include it in my list of recommended set from that series. In terms of size and detail, of course, there is just no comparison.

While the LEGO Architecture interpretation looks amazing decorating an office or shelf, this 4163 piece titan captures all the fine architectural details that make Big Ben such a visually striking structure. As I explained there, although we refer to the whole thing as “Big Ben”, Ben is actually the bell inside the clock tower. So I guess if LEGO wanted to be a bit cynical, they would have just put the bell in the box and called it a day.

Luckily, you get a decent piece of Westminster Palace, Elizabeth Tower itself, and the clock dials which – get this – have movable hands. There’s also a little surrounding scenery just to give it the sense of place that it deserves. I also love the fact that the bell is present and correct. If you want to have a gander at Big Ben itself, the top of the tower comes off, letting you see the inside for yourself.

There’s no arguing with the final results. The Big Ben set looks absolutely stunning and really does justice to the neo-Gothic architecture of the real-world building. This is one of my favorite designs and the price is even reasonable, given how many parts there are. One of the reasons for this is, so many of those parts are actually tiny. Although people do love the look and feel of the set, the actual experience of building it can be a little boring to some.

It all comes down to those small, repetitive sections of the building. The same aspects of the palace and tower that give them that fairy tale look also mean high levels of fiddly building. So although this is cheaper than than the Opera House by half, it may be better to go with the Opera House set if you’re looking for a less-frustrating build experience.

These three LEGO Creator Expert sets are of interest to people who like LEGO Architecture simply because they give us the option to hit the other end of the realism scale. Minimalism is beautiful and desirable, but sometimes you want a 4000-piece monster to sink your teeth into.

At the moment these are the only Creator Expert sets that replicate real-world buildings, but there are other fictional modular buildings in the series that are well worth looking into. I especially like the fairground rides, which include a ferris wheel and a merry-go-round. Structures that have movable mechanisms are always cool.

I think the Creator Expert toys could have a bright future, but that will all depend on the adult fans and their support of the product. For now, I’m just glad these advanced sets exist at all.