These days LEGO is all about space ships and other fantastic machines, but at the very beginning one of the most popular things to build were LEGO houses. Even today, model buildings are still very popular, as evidenced by the popularity of both the Ghostbusters and Simpsons LEGO house sets.

The LEGO Architecture sub-brand has taken the idea of LEGO model building and perfected it. These are beautiful and rather accurate representations of some of the most iconic structures in the world. It’s also pretty awesome that most of these sets are quite affordable, pose a decent challenge, and make for great display pieces.

Although the series hasn’t been around for all that long, there are quite a few sets out, and already some of them are bound to be classics. Of course, which sets you personally find attractive is going to be a matter of taste, but more than looks dictate what a given set has to offer. Some offer a great challenge or are simply striking or interesting in some way.

One thing that’s important to remember about LEGO Architecture models is that they are not perfect recreations. Often they are simplified designs that capture the essence of a building. The Creator Expert versions consist of more than a thousand pieces and cost five to ten times as much on average. They really are very different products. If you truly want to go all out, remember to check whether there is a Creator Expert version of a building that exists in the Architecture line.

So the LEGO sets I highlight here are the best in my eyes for various reasons, but it’s perfectly OK to disagree! 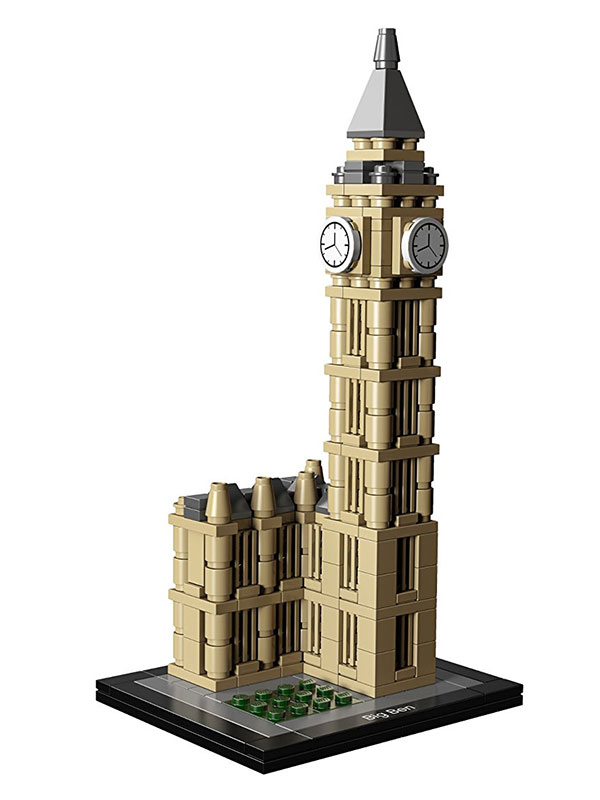 Not to be confused with the Creator Expert set of the same name, this very affordable set lets you recreate the famous clock tower that stands in London. Strangely enough, “Big Ben” isn’t actually the name of the tower. It’s the nickname of the bell inside the tower. Of course, Big Ben is for all intents and purposes the name of the tower today. The official name for the tower over most of its history was just “The Clock Tower”. Not very imaginative, but in 2012 it was officially named “Elizabeth” tower in honor of Elizabeth II. Honestly though, I doubt even the Queen of England calls it anything other than “Big Ben”.

Big Ben is a really beautiful structure. Completed in 1859, it’s done in the Gothic Revival style for which its designer Augustus Pugin is best known. The real Big Ben has lots and lots of little details and flourishes in line with its style, but the LEGO set only hints at these. It’s more like a rough sketch of Big Ben than a detailed replica.

Yet, there’s no mistaking that it’s Big Ben even at a single glance. The best part has to be the fact that this is only 7.7 inches tall, yet because the scale is right you get a sense of how tall the real Big Ben is. Simple, compact, yet instantly recognizable – these are the factors that make Big Ben the best LEGO Architecture set to perch upon your desk.

The One for People Who Like Tall Things: Burj Khalifa 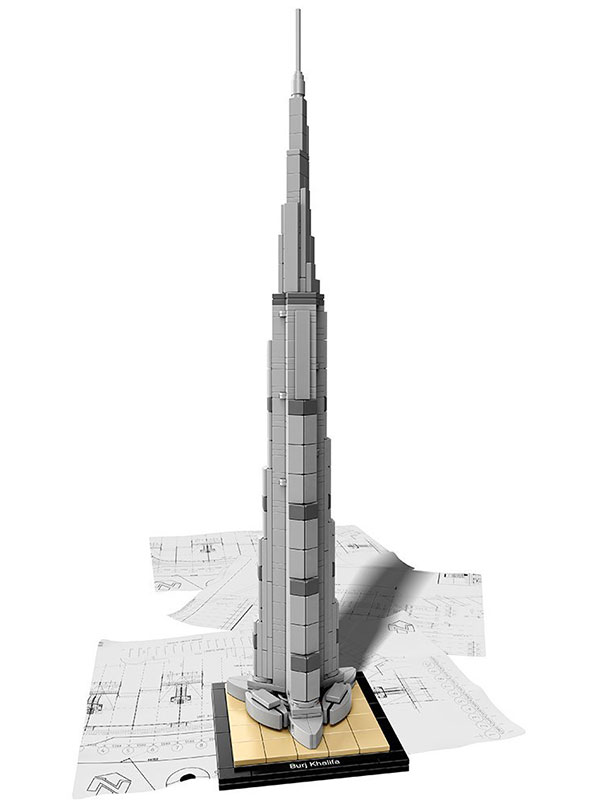 Even the most closeted person must surely have heard of the Burj Khalifa at this point. As I write this in 2017, it is still the tallest building in the world and has been since 2008. The Burj Khalifa (which simply means “Khalifa Tower”) stands at a staggering 829.8 meters, or about 2,722 feet. It’s a neo-futurist building with more than enough shininess for anyone. It has more going for it than simply being tall, however. The gorgeous tapered design and lovely three-pointed base make this a tower straight from a sci-fi dream.

Keeping in spirit (if not scale) with the status of Khalifa Tower, the LEGO model is the tallest one you can buy. At 15 inches it’s just over twice as tall as the Big Ben model. In real life, the Khalifa Tower is almost ten times as tall, but a 70-inch tall model is probably not that practical.

The LEGO model itself is simply beautiful to look at and, like Big Ben, it has a very compact footprint. Being so tall and with such a high center of gravity, I would rather put it on a shelf than a desk.

For the Architecture Fanatic: The Sydney Opera House 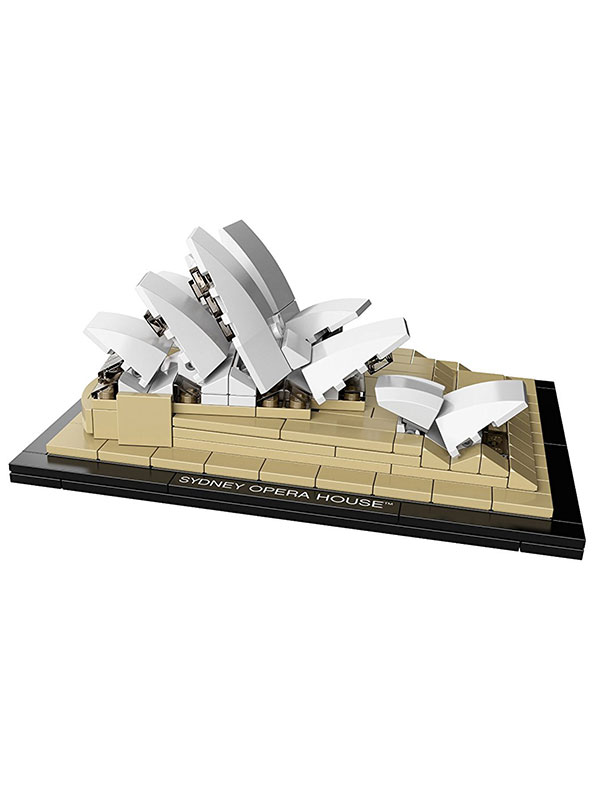 I almost feel like I don’t need to bother explaining why this building is on the list of best sets, but I’m going to anyway. The Sydney Opera House is, as the name suggests, a place where musical performances happen. The design of the building is timeless and it still looks absolutely beautiful, alien, and modern even today. So it may be surprising to learn that the planning began in the 1940s.

The design we all know today was the result of a competition which had 233 entries coming from 32 countries. The architect whose design finally won was Jørn Utzon, a Danish architect who won 5,000 pounds for his troubles in 1957. In 2003, Utzon won the Pritzker Architecture Prize for the opera house, one of the highest honors an architect can receive.

The set itself does the essence of his design real justice. Given the scale and cost of the set, you’d be hard-pressed to come up with something that so clearly evokes the Sydney Opera House without being much more expensive. As a case in point, LEGO sells an absolutely gorgeous model of the building in its Creator line, but that set is no less than five times as expensive as this one – if you’re lucky.

This set is another that absolutely begs to be displayed on a desk, a shelf, or anywhere it can be seen. Beautiful lines and a lovely choice of colors make this a set that I’m personally going to add to my collection soon.

For the Love of Art: The Louvre 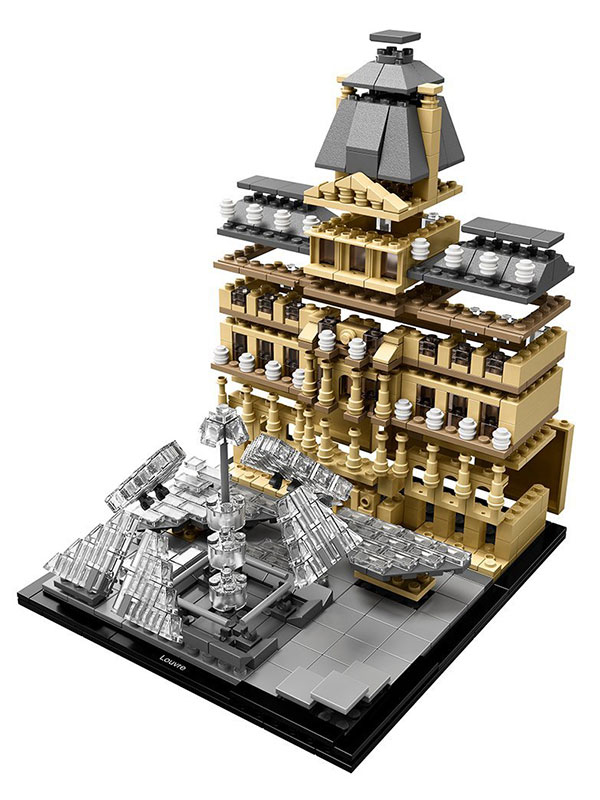 You may only know the Louvre as the home of the Mona Lisa, but it’s the largest museum in the world and a historic landmark in its own right. Within the walls of the Louvre there are about 38,000 objects on display, spanning from prehistory to modern times. The Louvre was established in 1793 and remains one of the most important landmarks in the world, even with the many additions and renovations.

This LEGO model of the Louvre couldn’t possibly encompass all of the Louvre as it is today. What you get are the most recognizable aspects, including the Pavilion de l’Horloge and the now-iconic glass pyramid that was completed in the late 1980s. It’s a moderately-sized set that measures five inches tall and 17×19 at its base. While it would be nice to have more of the Louvre, this is the most practical, attractive, and compact LEGO model you’ll ever get. Simply for the significant human cultural value it represents, no list of great buildings would be complete without including the Louvre.

The Icon: The New York Skyline 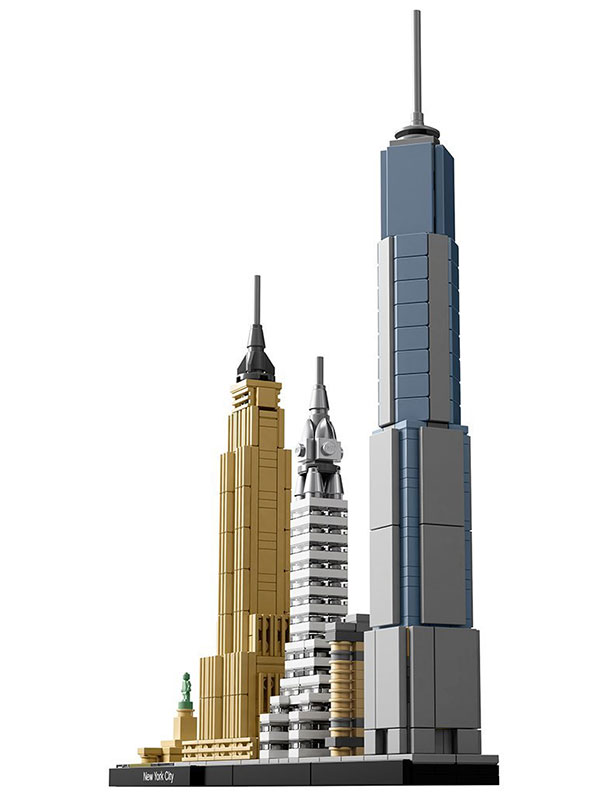 “The city so good, they named it twice”, as singer Gerard Kennedy sang, New York is probably the most iconic urban landscape in the world. It’s the most populous city in the United States and has played a prominent role in film, books, and music. There’s almost no end to the architectural wonders within the city limits of New York. Think about the Brooklyn Bridge, the Statue of Liberty, and, of course, Times Square.

It is, however, the New York skyline itself that encompasses everything New York. The unmistakable silhouette has graced posters, t-shirts, and countless establishing shots to cement itself in the collective conscience of the world. On September 11, 2001, a horrific attack changed that silhouette forever, with the destruction of the iconic twin towers of the World Trade Center. This set from LEGO reflects the new, modern skyline of New York, but is no less desirable for it.

Five structures are represented in their plastic glory here. I especially love the Statue of Liberty, which is just a grey-green minifig. I doubt anyone needs to have the significance of this symbol of liberty, gifted by the French, explained to them.

Next there’s the Flatiron Building, which used to be known as the Fuller building. While it may seem like an unremarkable structure by today’s standards, this was a groundbreaking skyscraper that opened the floodgates in the race to go vertical.

The Empire State building essentially sums up all that is New York – its very name coming from a nickname given to the State of New York.

The Chrysler building is probably the best known example of art-deco style today; although its height was surpassed by the Empire State building less than a year after achieving “tallest in the world” status, it’s still the tallest brick-and-steel structure in the world to this day. It is the fourth-tallest building in New York, a distinction it shares with the New York Times Building.

Finally, this set includes a depiction of the rebuilt World Trade Center building, known as “One World Trade Center” or sometimes as the “Freedom Tower”. It’s a beautiful addition to the skyline of New York and was designed by an architect that works for the company responsible for the Burj Khalifa.

All in all, this set is wonderfully cute, cheap, and instantly recognizable. If you can only afford one set right now, this one gives you five buildings for the price of one set. It’s a great deal and a great product for LEGO.

I’m completely on-board with the idea that my top five list is nothing special. We all have different ways of measuring the worth of architecture, so your list may look nothing like mine. Still, I’m convinced at least one of these worthwhile sets will put you on the path, and surely LEGO is only getting started with this series.

I, for one, will be keenly keeping an eye on any new LEGO Architecture releases. There are so many wonderful structures all over the world that I will never see in anything other than pictures. These model interpretations from LEGO are the closest thing we’ll get to having a little piece of the magic in our presence.