The 5 Most Amazing Custom LEGO Builds

The 5 Most Amazing Custom LEGO Builds

For most people, LEGO is a guided building experience. They buy pre-made sets and then have fun putting them together. Often these will go on display, especially if it’s a big and expensive set. I’m certainly not going to judge anyone for keeping that Death Star II set together after spending hours and hours getting it right.

But that’s just half the story of LEGO. These plastic bricks started life more than eight decades ago without the inclusion of instructions or any pre-conceived notion of what you should build. Only your imagination (and budget) had any say in what was possible. For hardcore LEGO fans, that’s where the true spirit of this popular toy lies – in designing, planning, and executing your own build. For most of us that’s limited to whatever will fit on your worktable, but some go far, far beyond this. This page is dedicated to the most amazing custom LEGO builds that I know, either in terms of size, intricacy, creativity, or all of the above.

In 2008, Gizmodo reported on this massive LEGO build that has a total footprint of 140 square meters, or about 1500 square feet. This replica of the iconic NASA facility used 750,000 bricks and had a total build time of 2500 hours. The tallest structure is a model of the Saturn 1B rocket, which is 9 feet tall. The attention to detail and the sheer design ingenuity that had to go into making such a big structure out of LEGO is mind-boggling.

This is an official LEGO build for LEGOland in Germany. The scale of this stadium replica is insane. The builders used the original architectural plans to put together a model replica of the original building. The Allianz Arena is an impressive building in its own right with 66,000 seats, and in making a LEGO replica of the stadium 4,209 man-hours were needed. More than a million bricks were used, which is 25% more than the space center above. Most amazingly, there are 30,000 minifigs standing in for the sports fans.

The James May LEGO House

Most people probably know James May from his stint on Top Gear, but he’s also been in more than a few other really good TV documentary series. One of my favorites is Toy Stories, where he delves into some of the most iconic toys in history, while also doing something ridiculous with them. For example, in one of my favorite episodes he lays a toy train track spanning miles to see how far the little scale model trains will get before giving up the ghost.

An episode about LEGO was inevitable, but James really went over and above with it. With the help of about 1000 volunteers, he built a full-scale house with everything from a bedroom to a toilet. The house is 20 feet tall and required an epic 3.3 million bricks to make, which by my calculations means over 200 thousand dollars in bricks. The house is sadly no more, since the LEGO company decided it didn’t want it for its LEGOland parks after all.

The problem is that James didn’t consult with their builders, which means the house was not built in such a way that it would be movable. It’s also not quite true to say that it’s “entirely” made of LEGO, since it did in fact have a timber frame to support all the bricks. Still, it’s such an audacious build it definitely deserved to be on this list.

Batman has been very good to LEGO over the last few years with successful games, a great movie, and, of course, many beloved LEGO sets featuring Batman and his friends and villains. There’s nothing you can buy from LEGO that gets anywhere close to this custom model of the famous Arkham Asylum. In case you didn’t know, Arkham is the place that Batman sends his villains, at least until their next escape. It’s a dark and Gothic place which has almost become a character in itself. This build was the result of more than a year of planning and an additional four months of build time. It’s hard to argue with the results; in total there are 18,000 pieces in the build. Holy free time sink, Batman!

LEGO is no stranger to fantastic Star Wars vehicles, and their big Death Star and Millennium Falcon sets are on the wishlists of many LEGO fans. None of those sets can hold a candle to this custom Super Star Destroyer, which is one of the biggest spaceships in the Star Wars universe.

This is by far one of the most intricate builds I have ever seen. At this scale it was possible for the builder to put in almost every detail from the actual model used in the film. It’s almost impossible to believe that this was done with LEGO. The 6.62 foot monster uses a whopping 40,000 bricks and weighs in at 110 pounds (50 kg).

Some LEGO fans have noted that they don’t like how much stud-hiding is happening here, but if the goal was to build an accurate-looking Super Star Destroyer I’d say this particular builder has knocked it out of the park. 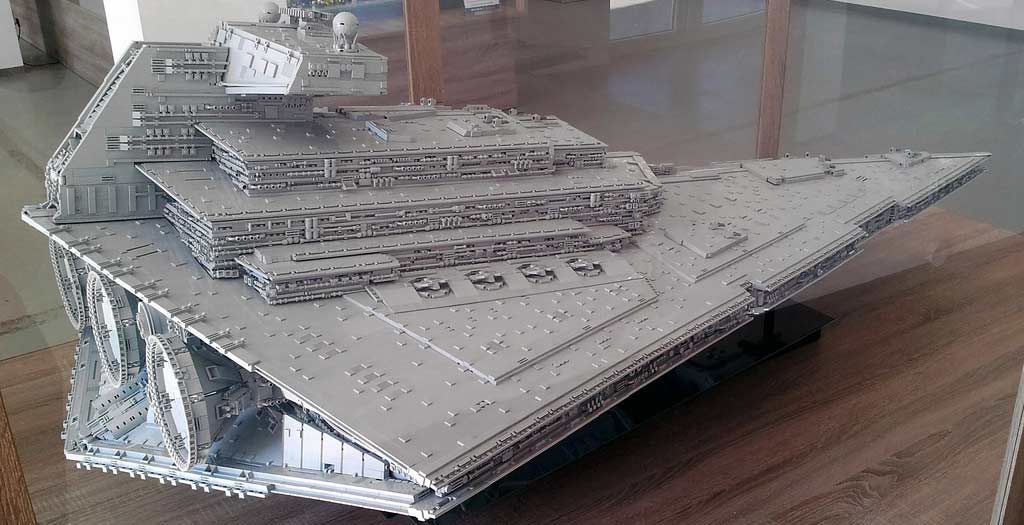 The Sky’s the Limit

There are two ways you can feel when you see incredible builds like these. On the one hand you could feel demotivated because you have trouble planning and executing your own build with just a 100 bricks. Alternatively, you can feel inspired and use that to drive your creativity to new heights.

I find it helpful to know exactly how many hours of planning and building a particular build involved. One of the biggest roadblocks I’ve had even when completing pre-made sets is underestimating the scope of the project. These pinnacle builds give me more respect for the craft of LEGO model building. I’m also aware of the role that computer software plays in these builds. The fact of the matter is that normal people like you and me would not have been able to create mega-builds in the days before software to plan LEGO models before a single brick is laid. I look at these software in another article(LINK), but all I can say here is that a build that takes 10,000 precisely laid bricks is not something you want to sketch on graph paper.

Oh wait, did I say five custom builds? Actually there’s one more and I think it may top all of them for sheer scale. So before you go, let me introduce you to the life-size Star Wars X-Wing.

Oh boy, oh boy. Whether you like Star Wars (like a normal person) or not (like some weirdo), you have to admit that this life-size X-Wing is a thing of beauty. It is twenty-three tons of LEGO consisting of a whopping 5.3 million bricks. That’s more bricks than James May’s LEGO house, and that was big enough to live in! To be fair, like the May house this uses a non-LEGO subframe, but if it didn’t the whole thing would collapse under its own weight.

As a fan of vehicle models, and in appreciation of its audacity, I have to rate this as one of the most amazing mega-builds of all time.