LEGO with a Purpose: 10 Cool Ideas

Home/Guides/LEGO with a Purpose: 10 Cool Ideas

LEGO with a Purpose: 10 Cool Ideas

LEGO is just a toy right? We build models of things and neat little curiosities, but most people wouldn’t think of building something with an everyday practical purpose using these little plastic bricks, would they? Well, as you can tell from the title, such assumptions have no place in the world of LEGO fans, who try all sorts of things with this creative toy that LEGO itself could never have imagined.

After all, LEGO is made from a sturdy material that still has usable structural properties. We can easily exceed those limits, of course, which is why very large models such as life-size cars are usually built on a wooden or steel frame. At a more reasonable scale, however, LEGO is plenty strong and can be used in all sorts of life hacks. Anyone who has ever stepped on a LEGO brick barefoot can tell you how tough those suckers are.

If you go Googling for practical ideas you can use LEGO for, you’ll find many options to choose from. But here I’ve summarized 10 of my favorite ideas from all over the web. Even if you don’t find a specific LEGO hack here that you yourself can use, it’s always fun to see how how other people have thought in a new way about using LEGO, and the novel uses they come up with. Some of these are pretty obvious when you think about it, and some are just plain creative. All of them show that LEGO can be more than just a toy!

You’ve probably seen those LEGO minifig keyrings where they put a string through a hapless minifig and let you dangle it from your car’s key fob. That’s cute and all, but what if you used LEGO to manage ALL of your keys?

Yep, it’s actually pretty simple. You just need a small baseplate, which you screw into your wall by the front door. With a little bit of drilling and some flat LEGO pieces you attach a brick to each keyring. When you get home all you do is snap the brick attached to your keys onto the baseplate and you are ready to rock.

There are many different takes on this basic concept, but here’s a neat little instructional video that you can follow to make one in the most straightforward way.

This one is so obvious I have no idea why I never thought of this myself, to be honest. Unwrapping a gift is always fun for the person who is receiving it, but unless they are one of those weirdos that carefully removes wrapping paper, it’s actually pretty wasteful. These days it’s becoming popular to present gifts in special gift bags, but once again you end up with something you have to use to carry a gift for someone else or it will be thrown away. So why not present a gift in a box made of LEGO?

Think about it. The person can actually use the LEGO after they’ve received their gift, and basically the LEGO is another part of the gift. It’s obviously perfect for people who also happen to be into LEGO and would appreciate the idea. It also means you get another excuse to build something out of LEGO, so everyone wins.

Have you ever noticed how the little claw hands of a minifig are the exact right size to hold the typical USB or lightning cable? By using a slight variant on the keyholder idea, you can turn your unwanted or otherwise disposable minifigs into little cable-holding slaves, er helpers.

You need to attach a baseplate to the side or back of your desk, either with screws or glue. Then just stick the minifig onto it by the back of its legs. Clip the cable into its waiting hand and you’re ready to go. Just add more minifigs if you need more cables managed.

There’s no better place to build practical things from LEGO than your dedicated LEGO building space. How much time do you spend in there anyway? Are you keeping track? Do the days just fly by as you work on your latest epic project? 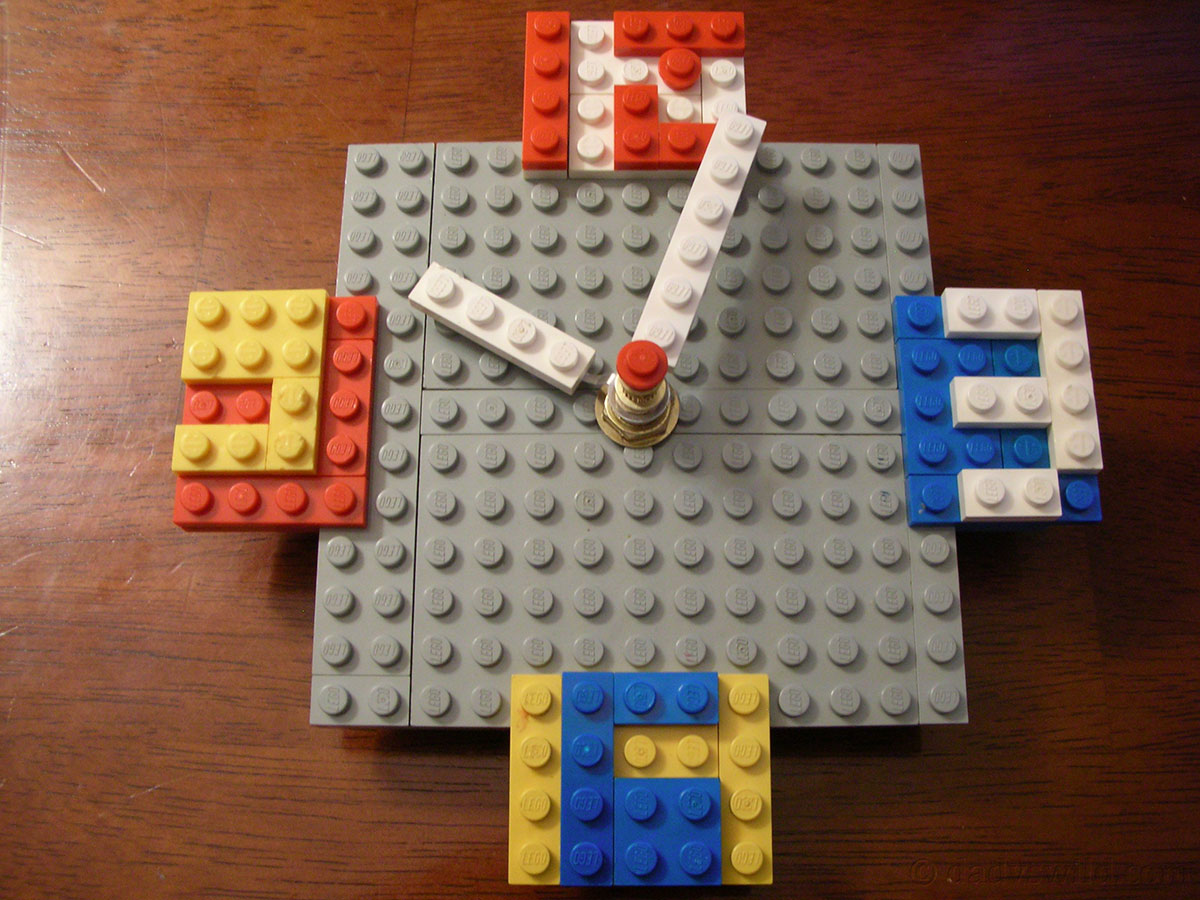 Well, maybe it’s time to take some control of your LEGO time and treat yourself to a clock made from LEGO. I’m not suggesting that you build the timekeeping part of the clock out of LEGO, although I’m sure some Mindstorms or Technics genius is already working on that. No, you can buy the guts of a clock for cheap – what you’re actually building is the clock face itself.

How you do that is of course up to you entirely, but the simplest approach is to take a large baseplate and put the shaft of the clock through a hole in the middle. You can then use minifigs or other LEGO structures on the baseplate to represent all the hours. Easy peasy!

Let’s face it, we’re all pretty much slaves to our smartphones these days. Despite major advancements in phone technology over the years, battery life on modern phones still pretty much sucks compared to the phones of the early 2000s, which could truck for a week or more in standby mode.

With a modern phone you’re lucky to get 24 hours out of the thing, so whenever you are at your desk your phone really should be charging. To make that less of a chore, why not build a custom charging station and dock for your phone from LEGO? Not only is this fun, it makes financial sense too. Every time you buy a new phone you also have to buy a new charging dock. Here you can just adapt the LEGO one to suit the new phone. 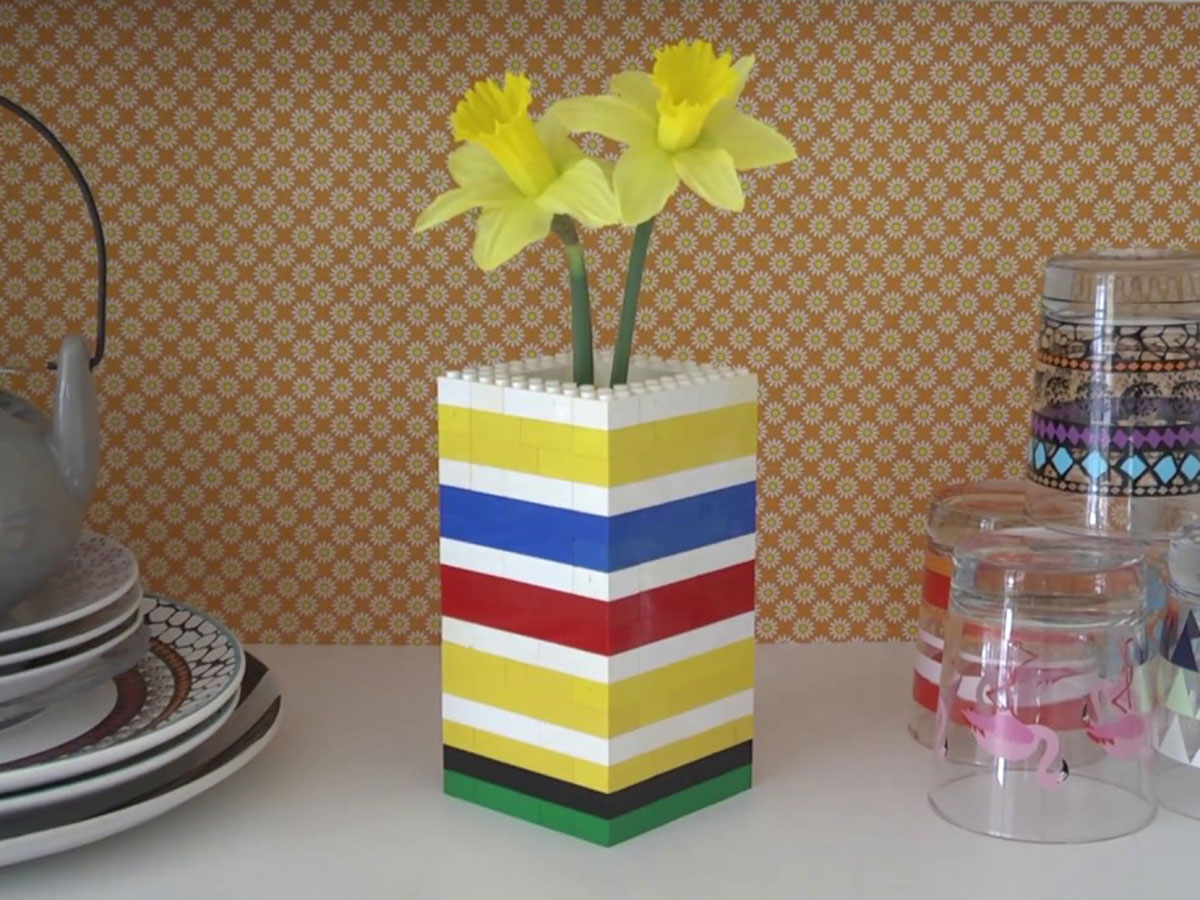 Everyone knows what you use a vase for and it’s an object that’s pretty mundane, but have you ever tried to build one from LEGO? It’s a fiendish building challenge, and at the end of the day you also have something you can stick flowers in.

Well, it is a challenge if you build a classic vase shape. You can also chicken out and and simple build a rectangular one – it won’t look as cool, but it will get the job done. Fill your LEGO vase with water at your own peril however. You may have to use a plastic liner on the inside to allow for water retention. 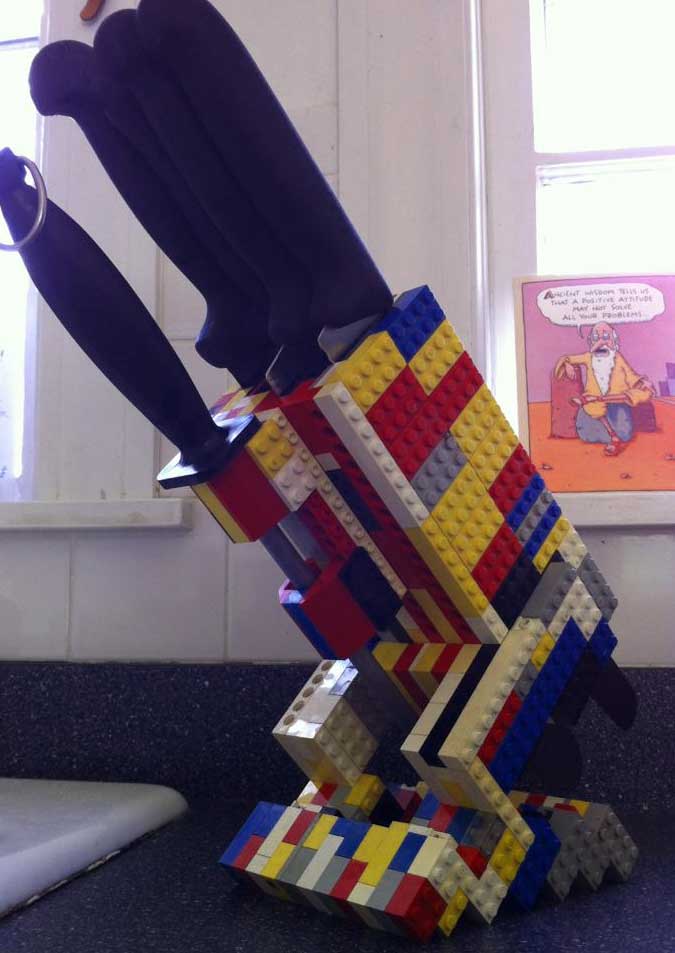 Have you ever bought a set of knives that came with a knife block? So nice and neat with every blade in its place. Lose a knife or buy some extra ones and it pretty soon starts looking a little dumpy, so why not make a custom knife block from LEGO?

You may think that the ABS plastic that LEGO is made from isn’t going to stand up to a sharp metal knife being slid in and out against its surface, and you’d be right. It’s not actually a problem, however, unless you were planning on using the blocks again in something else, but even in that case you can make sure only the roughest blocks are the ones that come in contact with the knife.

Maybe the smartphone holders are more relevant these days, since it seems fewer and fewer people actually own computers. When they do, it’s also invariably a laptop of some sort, but that doesn’t mean that the traditional PC is dead. On top of that, custom PC cases and PC case modifications are a hallmark of PC enthusiast culture, which I don’t have to tell you often overlaps with LEGO fandom.

So why not combine your love of PC stuff with a love of LEGO and build a computer case from your fave plastic bricks? Sure, it might be a little fragile compared to a fancy store-bought case, but you’ll have something unique that your friends will drool over.

There are quite a few LEGO PC case build tutorials and projects on the web, but I do like this one by TotalGeekdom. 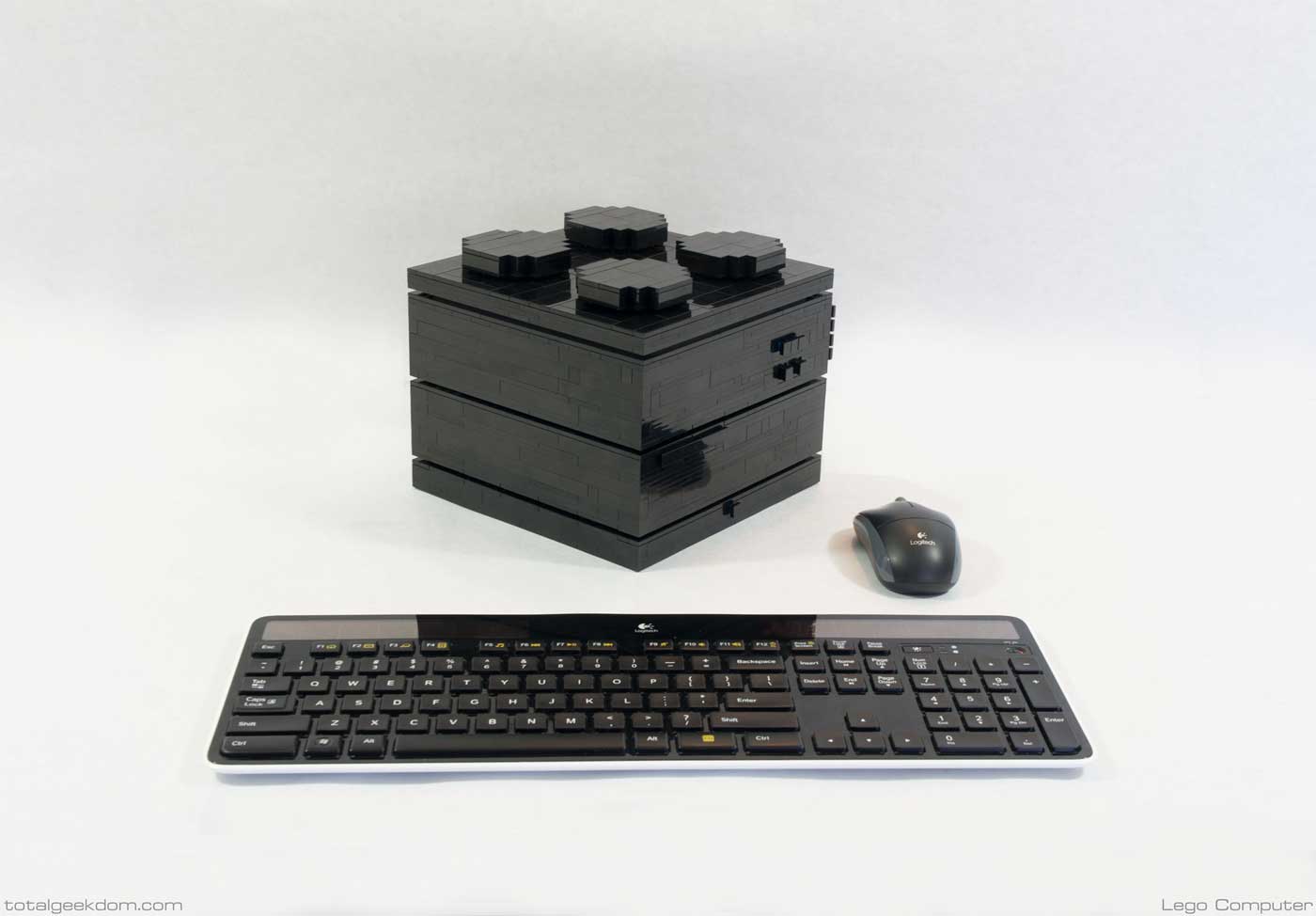 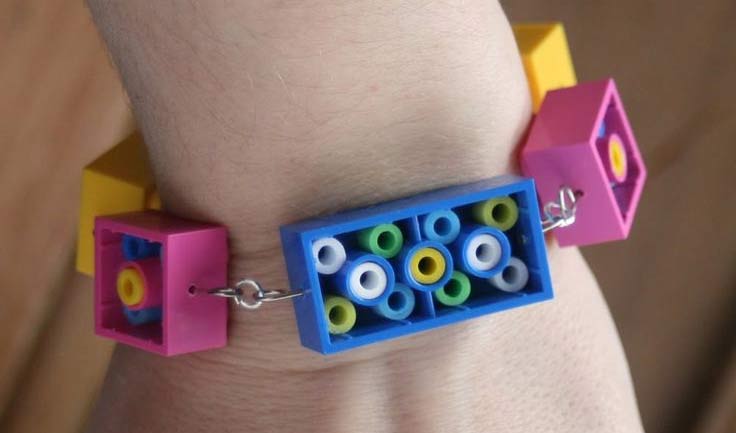 It’s not my cup of tea, but I’ve seen lots of different projects to make all sorts of body decorations from LEGO bricks. Sometimes this involves combining chains and rings with LEGO, using glue or by drilling holes. Whatever you end up making, there are an endless number of examples on the web to inspire your personal LEGO fashion.

Kids in particular may like some LEGO jewelry and, in general, if they are old enough to play with LEGO they should be fine wearing a LEGO necklace or something similar. However, I would recommend that you sand the sharp corners down, since a bump or fall can open up the skin.

I decided to lump all of these together since there are many variations on the idea. People seem to have a penchant for making LEGO homes for various pets. I’ve seen LEGO dog houses, cat boxes, bird feeders, and various rodent homes. 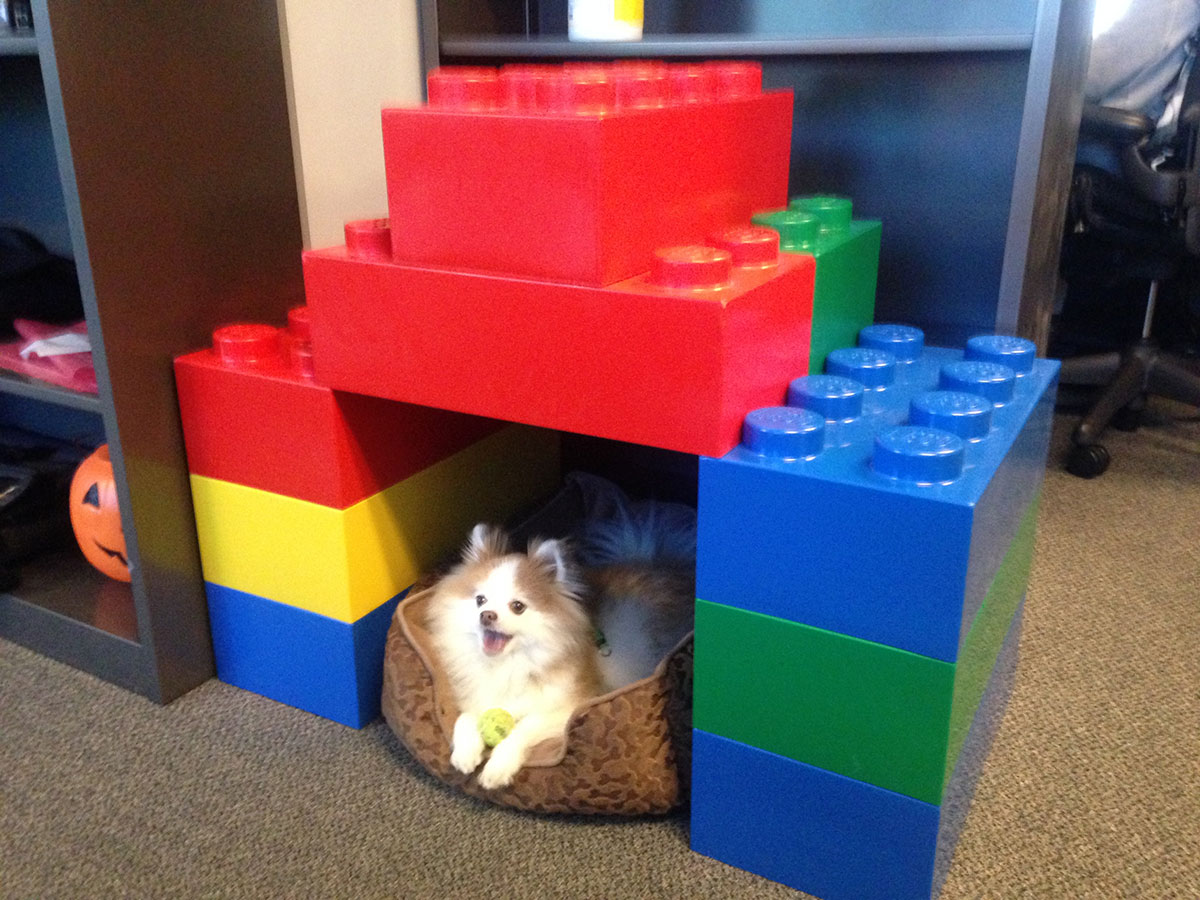 If you use your common sense you can actually make something pretty neat for your pet and you, but you have to keep the well-being of the pet in mind as well. I don’t think it’s a great idea to make a little LEGO house for a rodent. As someone who has had quite a few rats as pets, I know those little cuties like nothing more than chewing through whatever you give them, which could be a bad thing if they ingest a bunch of LEGO plastic.

For the rest, well, I’d consult a vet, but it should still be pretty safe in general, since ABS plastic isn’t toxic unless maybe you set it on fire and then inhale the fumes. It could be used to build one hell of a tarantula enclosure, though.

Things To Keep in Mind

As you can see there are a whole heap of interesting and useful things you can build with your LEGO pieces, but you should keep a few important facts in mind.

First of all, if you drop something made from LEGO, there’s a good chance that it will shatter into its various pieces. If you want to make a permanent structure from LEGO with more strength, you should consider gluing the pieces together using a glue that is suitable for use with ABS plastic.

Also, keep in mind that LEGO can’t bear all that much weight, even if you glue them together. I’ve seen people build stands and even furniture from LEGO as a challenge. It’s cute as a curiosity, but I don’t recommend using LEGO for any sort of load-bearing job – at least not without a metal or wood sub-frame.

Similarly, don’t make stuff that needs to stand in the sun or near a heat source. At best you’ll end up with brittle, bleached LEGO. At worst, you’ll get lots of nasty smoke and a puddle of melted plastic.

Also, keep in mind that LEGO that stands for a long time can accumulate dust and also mold in the same way that tiles do, providing lovely little spaces for the mold in the gaps between bricks.

Finally, definitely don’t forget those sharp LEGO edges. If the thing you make needs to make contact with human flesh, try to round off sharp edges with sandpaper to avoid cuts or jabs.